Nothing common about Boston 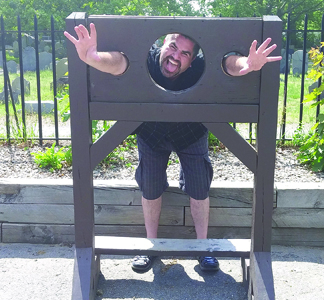 Recently, I made the trip to one of New England’s greatest cities and states – Boston, Massachusetts. Along with a jaunt to the infamous Salem and I resided in the quaint and Stephen King-esque locale of Hull, which was a five-minute walking distance from both the nearby bay and ocean.
Since a teenager, I have always wanted to visit the New England area of the United States. Now, almost 43 years later, I made the pilgrimage and it was a fantastic and unforgettable experience I got to share with my children on the East Coast.
During my travels I stopped by Cambridge, which is home to Hahvard University and Bartley Burgers in the Square, where I tried the Ben Affleck burger, who hails from Bean Town. In Boston, I had a few Samuel Adams local beers and Boston baked beans at the popular tourist destination, Cheers. I also paid a visit to superstar Mark Wahlburg’s family restaurant, which is located just outside of Boston and is featured on the hit reality TV series, “Wahlburgers.”
I also had a taste of an actual Boston cream pie, which was amazing, especially with a nice cup of coffee. I did sample a bit of someone’s clam chowda, during the trip.
One of the highlights was a day excursion by commuter train to Salem, home of the historical and severely misunderstood witch trials. Where humanity shined brightly — not. The Salem Witch Museum was a great way to learn about history with a cool presentation with a finale showcasing the evolution of the witch and the many ways society has orchestrated witch hunts for many historical “not our brightest moments” moments. The Witch House was also a pretty cool piece of Salem history and I even had a paranormal experience to take home with me.
My kids and I were extremely impressed with the Boston Duck Tours. It’s a WWII land/water vehicle, which takes visitors on a tour of Boston by way of the city’s historic roads and by the Charles River. My kids even got a chance to play captain, while they took turns at the helm during the tour on the river. Boston is a beautiful city but seeing the harbor by boat is one of the best ways to experience it. We also went on a harbour brunch cruise, which was another great way to view the sites of one of America’s oldest cities.
Other attractions included the Boston Children’s Museum. The museum is located across from the Boston Tea Party attraction, where a ship can be boarded and the tea party re-enacted. Children of all ages can enjoy the state-of-the-art kids’ zone but it is more of an attraction for younger kids, as most of the activities are geared towards young children. The climbing wall was noteworthy though. But, it was still fun for the whole family.
I travelled by planes, trains and automobiles and by the end of the week I was starting to get into a routine. Walking along the beach was a highlight too but the water was ice cold but that didn’t stop me from at least going in past my waist. Brrrrrrr.
New England was on my bucket list, Salem was a must-see during my lifetime and Boston was a great place to visit and explore. It is where history in the U.S. was alive with Bunker Hill, the Boston Tea Party, the Revolution, and the Boston Massacre — all integral pieces of American history. I got to walk along the streets where America’s forefathers gathered to create history.