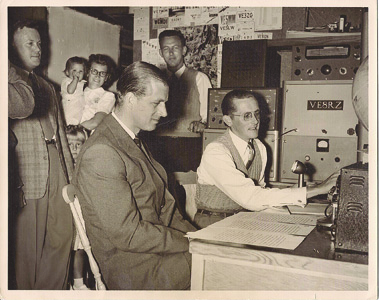 The other day a friend asked what kept me interested in amateur radio.
I’m not a contester, I enjoy the occasional rag chew, chase a little DX and have done some community service but why am I still involved in this day of instant communication and the Internet?
After much introspection (old guys become good at this) I concluded it was because I enjoyed the “Magic Moments.”
I’ll explain by way of example. Assembling my first Heathkit and the smoke stayed in, the lights lit up and it worked. Making my first contact ever, getting APRS or PSK 31 to work or building my first J-pole antenna and finally reaching that repeater. It includes things like helping my son get his own amateur licence or mentoring a new ham and sharing their excitement.
These experiences created “Magic Moments” that let me feel I had accomplished something of value and gave me pleasure.
Let me share the “Magic Moment” that started it all for me. It was 1954 and we lived in Yellowknife in the North West Territories of Canada. My father, VE8RZ, (now SK) worked for the Canadian government, as the airport electrician. He also volunteered as the station manager for the local CBC radio station and was very active in ham radio.
Yellowknife, in those days, was truly an isolated northern community built around gold mining. Most of all the supplies were brought in by barge across Great Slave Lake in the summer and travelling “out” was by way of airplane. Amateur radio brought the rest of the world closer to us on cold winter evenings.
You can imagine our excitement when it was announced HRH Prince Philip, the husband of Queen Elizabeth II, was coming to Yellowknife for a visit. It was even more astonishing to a seven-year-old when I learned the prince was coming to our home. Oh the bragging rights amongst my friends was incredible. I was the envy of all, as I was going to actually meet him and shake his hand.
It had been decided Prince Philip would broadcast a message to several northern communities in Canada using my father’s amateur radio station and “Operation Polar” was born.
Schedules and frequencies were arranged, equipment tweaked and tests were run in anticipation of this great event. My job was to be one of those to greet the prince at our front door — to bow, shake his hand and say “good afternoon sir” and then get out of the way.
Finally, the great day arrived (Aug. 10, 1954), as did the prince in a Canso flying boat landing on Great Slave Lake. It seemed as though the entire town was there to welcome him.
After speeches and a meal of buffalo burgers he was transported to our home. We were ready and the prince proved to be both friendly and interested in us as individuals.
I watched my father activate the Operation Polar net on 14,320 MH and listened as the prince read prepared remarks about development in the Canadian north to 16 stations situated in northern Canada.
This was incredible to me that the prince was sitting in our basement using my father’s radios to talk to people hundreds of miles away. This was truly a magical moment that affected my entire life including my career and hobbies.
As a memento of this event, we treasure the only photograph taken as the prince asked the photographer to leave, as this was a private home.
Today, my son and I carry on the ham radio tradition and honour my father by incorporating his call letters into ours — VE6BRZ and VE6DRZ/VK5DRZ.
May you also find and treasure those magic moments. I know I will.