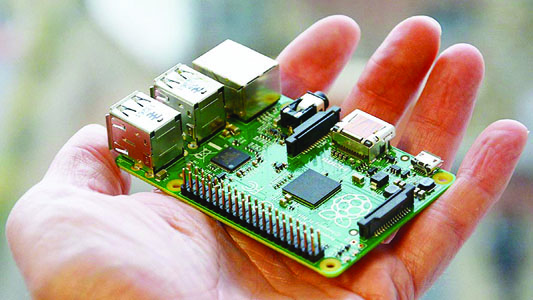 When is a raspberry not a fruit? When it is a computer.
In 2006, a group of computer engineers at Cambridge University in England became concerned students entering the computing science faculty knew very little about computer programming.
They concluded, complexity and cost of present day computers discouraged young people from learning how to write computer programs and create new uses for computers. They decided to do something about it and in 2008 created the Raspberry Pi Foundation with the goal of creating a powerful, easy to program yet inexpensive computer. They hoped to make the computer available to young people throughout the world but especially in third world nations.
Their first computer was called the Raspberry Pi B and sold for $25 USD in 2011. It is tiny, about the size of a deck of cards. They have continued to improve the device over the years and today sell the Raspberry PI 2 for $35 USD.
It is important to note the Raspberry is just a motherboard and other components are needed. These include a monitor or television, a power supply (five volts DC), a keyboard, mouse, a case and a micro SD card with the operating system (OS). Their OS is based on Linux, a free competitor to Microsoft and Apple. Many companies offer a starter package that include many of these items.
I purchased a starter kit from Amazon Canada that contained everything needed with the exception of the monitor, keyboard and mouse —which I already had. The cost was about $77 Canadian including taxes and shipping.
Assembling the computer was quick and easy and within half an hour of opening the box, I was ready to load the operating system and get started. Loading the OS was also very easy and consisted of plugging in the micro SD card, connecting the power cable and watching the magic happen. I had to answer a few questions such as what language I wanted and where I lived, so the correct time could be displayed but that was it.
My starter kit included a wireless WI-FI adapter, so I was able to plug it into one of the four USB ports on the computer and easily connect to the Internet and use Google or read e-mails.
The interface is very similar to Microsoft Windows, in that, it has icons on the screen and one can simply point and click with the mouse button. The computer, although small, is amazingly quick and able to do many tasks including word processing using the supplied software. It can stream movies from the Internet and act as a media centre — once again, using the supplied software.
One of the most exciting thing for experimenters is the 40-pin GPIO header on the computer. GPIO stands for General Purpose Input/Output. These 40 pins allows the user to connect other devices to the computer such as lights, motors or switches. The user would then write a program to turn the lights on or off or make the electric motor run, as part of a project.
For example, people have used the Raspberry PI to create an automated pet feeding device and others have created robots. Many people have written about their projects and shared the “how to do” online for others to try and perhaps improve upon.
Do I think the Raspberry is worth the money? Absolutely and I’m not alone. To date — over 5,000,000 have been sold and the number just keeps growing. The best news, however, is the positive impact this little computer is having around the world and the way young people have accepted the challenge to be creative and help make the world a better place.