Fishing Down Under has its challenges 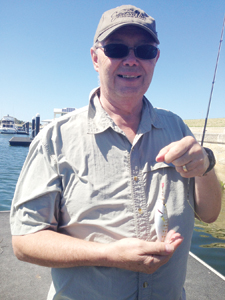 During our recent trip to Australia we decided to repeat our previous fishing expedition where we went out on a charter boat in the South Australian Ocean. This previous fishing trip included our son, my wife and myself. Unfortunately, on that trip, mother had insisted we not go after big fish — as they may pull her out of the boat, but she then went on to catch more fish than either my son or myself.
We were determined not to have a repeat performance of that experience. We considered various ways of sneaking off for the day or discovering that only big fish were biting and other sneaky ideas, but she saw through them all. We finally took the bull by the horns and told her we wanted to catch big fish and if that was a problem she should not go.
To our surprise she agreed to stay home. Unfortunately, because of our delay while we plotted and inclement weather, we were unable to book the charter boat for the time we had available. This called for Plan B.
My son suggested we go surf fishing and assured me we would catch fish and had a good chance of landing an Australian Salmon. Now I have gone salmon fishing in B.C. and have caught fish weighing between seven and 32 pounds, so this sounded promising. I had never surf fished before, so this would be an adventure.
First thing we need to do was get me outfitted. My son already had a surf rod and knew what I needed, so off to the sporting goods store we went. Soon I was the proud owner of a 12-foot long fishing pole and a heavy duty reel loaded with 40-pound test line. Special weights that would hold in the heavy surf and hooks for the bait fish were acquired. We were still a little worried mother would re-invite herself on the trip, but when she saw the size of our fishing rods and how heavy they were, she agreed this was not for her. The great day finally arrived and at 5 a.m. we headed out on the four hour drive to the coast. The scenery was interesting and the views of the ocean promising. The surf didn’t seem too bad and the sun was shining.
We stopped at a lookout point by a beach to take a closer look and had a nice visit with some folks from Hope, B.C. Go figure, small world. We drove on a bit further and found an access point where we could drive right onto the beach without getting stuck in the sand and decided this was the place to catch fish.
My son then proceeded to teach me the finer points of fishing from shore into a surf. First thing was to attach a special weight that had heavy wires you could bend down to catch in the sand to the end of the fishing line.
These wires would hopefully stick in the sand and hold your bait in place and not have the waves wash it up onto shore. The bait fish was attached to a series of three hooks that made sure if something bit it they would stay hooked. The next step was to identify the target area in the water, where you wanted to cast your line.
This involved looking for a spot where it appeared to be deeper than the surrounding area — perhaps close to a small reef. This spot was usually quite a ways from shore, thus the long poles to help you throw your bait out further. The target areas we spotted were a little too far for us to cast and hit, so it was necessary to wade out into the water.
This turned out to be pleasant, as the water was quite warm and the waves not to large. And so we fished and fished and fished and caught nothing other than a sun burn. This was not looking good at all. There was no way we could return home and report to mother we had caught nothing and admit she was still a better fisher person.
My son then created Plan C. We would go to a nearby town and there fish off the breakwater, as he had seen people catch fish there. He reassured me Australian Salmon were still on the menu and we might yet return home victorious. So we packed up and drove another 45 minutes to the town and located a likely spot to fish.
My son informed me large surf rods were not really appropriate for this type of fishing and we needed to use the smaller trout rods he had brought along. This worried me a little, as the salmon I had caught in Canada were a pretty good size and a trout rod would have been too small, but I deferred to his local knowledge.
Well, to make a long story shorter, I caught an Australian Salmon. The only problem was it weighed five ounces and would easily fit in the palm of my hand. Talk about embarrassing. Well, we finally admitted defeat and headed home at the end of a long, but very enjoyable day where we listened to mother laugh, as we shared the story of our great fishing trip.
At least I didn’t get skunked.