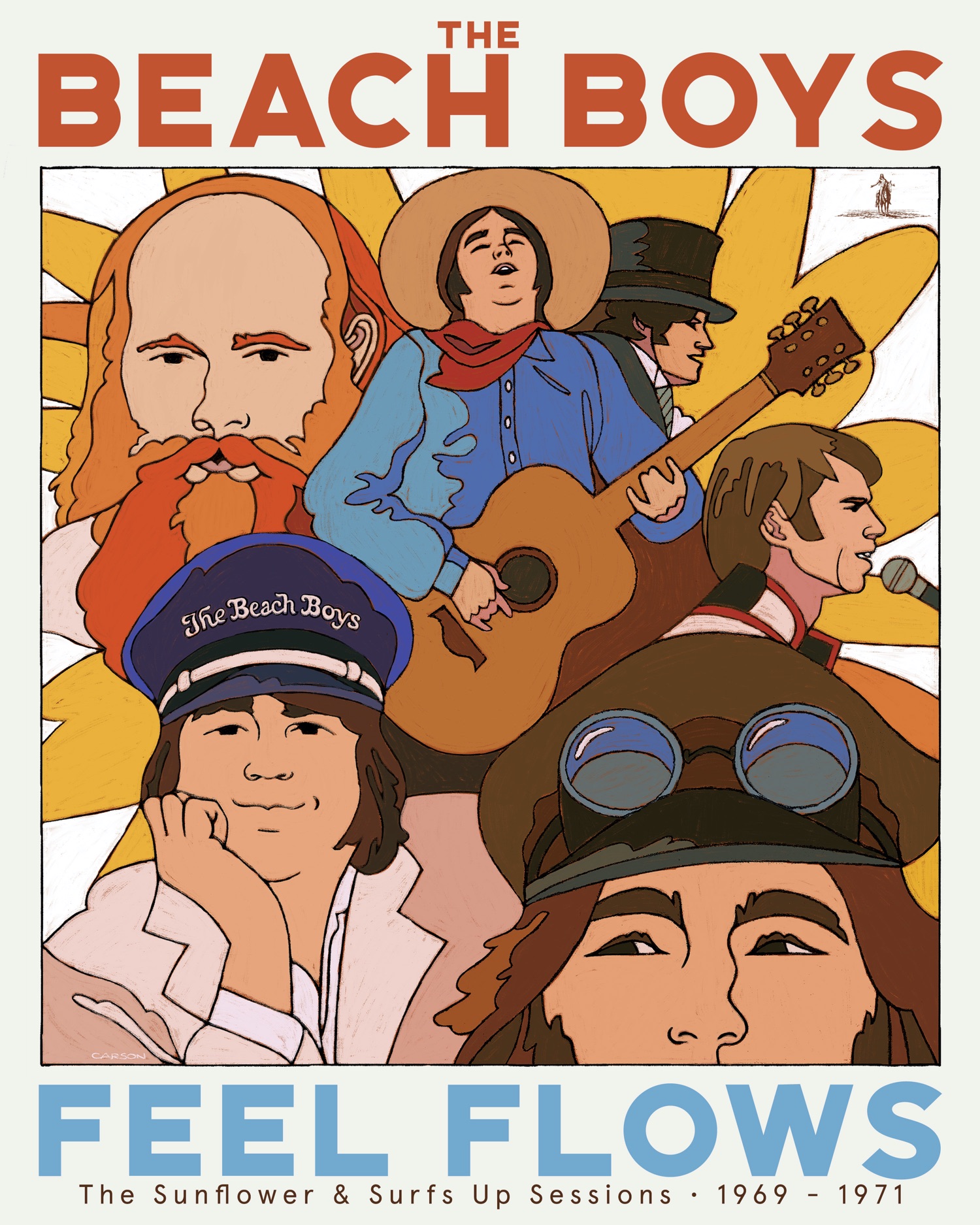 For decades, The Beach Boys have been synonymous with summer, sun, surf and ultimate good times! But, there’s so much more to the group’s long-living legacy. The California legends not only influenced, but defined the “surf scene” for generations and released a plethora of albums — that were deemed widely-diverse and genre-defying.

In 2021, and in honour of 50 years of The Beach Boys’ timeless and often under-appreciated albums, Capitol/UMe will be releasing the expansive five-CD and digital box set “Feel Flows — The Sunflower and Surf’s Up Sessions 1969-1971” on Aug. 27.

Housed in a book-style package, the set is rounded out with a 48-page book loaded with unreleased and rare photos, lyric sheets, tape box images, recording artifacts, insightful new liner notes and new and archival interviews from Al Jardine, Brian Wilson, Bruce Johnston, Carl Wilson, Dennis Wilson and Mike Love.
“For the last 10 to 12 years, we’ve actually been doing these on a fairly regular basis,” says Boyd. The process began with the “Pet Sounds” and “Smile” sessions. This was just the logical next step in the catalogue.

“Alan and I have been working together for about 21 years and I’ve been working with The Beach Boys catalogue for over 34 years, and this is a period we both always wanted to see covered in this way because not only is it musically important, it was also the transformative period for the group,” adds Linett. “Where they finally escaped their 1960s image.”

According to the producers, the band had moved past their early sound several years before — “but they got stuck, as a lot of groups, in the image of the stripe shirts, surfing and cars. It was these two albums, especially ‘Surf’s Up’ — it got them to be popular with the then contemporary alternative FM market and audience.”

Audiences in this period, the producers explain, “suddenly became much more open to a wide-variety of music.”

Boyd and Linett found some tracks the producing duo didn’t even know existed that included some fascinating material with Brian Wilson and his father working on a song and a couple of tunes nobody has ever heard before. Fans, Boyd and Linett add, will really relish getting to hear more of the creative process, the richness of the vocal parts, the backing tracks and having the chance to hear some of those, as separate elements.

It was one of the most prolific and productive periods of the group’s entire history, musically — according to the producers. And the two albums were legendary and beloved albums among “those who have heard them.”

“We would really like to spread the word to the diversity and the richness of the group’s catalogue because they did so many kinds of music, so well,” notes the producers. Somehow, this music seemed to transcend being categorized. The group seemed to move away from being pigeonholed with hits about sun, fun, surfing and cars — which was incredible.

Back in the day, The Beach Boys and other similar groups were almost like “poster boys” or a “recruiting tool” for California and the California lifestyle, the producers say.

Longevity-wise, The Beach Boys had a hit with “I Get Around” in the middle of the British Invasion, when everybody else from the early 1960s were falling off the charts. Other music didn’t seem to survive like The Beach Boys did.

“It’s just down to their talent both as songwriters or as performers. They were able to, not only survive, but transcend that and become enormously popular in this time period and moving forward,” the producers point out. A pretty amazing feat for a band that began in 1962.

Beach Boys music, according to the producers, is so diverse and rich in its catalogue. “Oftentimes, a lot of people — especially younger people today — have them pigeonholed as ‘Fun, Fun, Fun’ and ‘Kokomo’ and their appearance on ‘Full House.’ But when they’re exposed to some of the more progressive and adventurous music the group did later, it’s like their eyes open and lightbulbs come on over their heads. They suddenly find themselves much more interested because they didn’t know The Beach Boys were so many different things.”

“They were a lot better than their early contemporaries, which became apparent even on the second album,” which was “Surfin’ U.S.A.” In retrospect, according to the producers, “what you see is there was a completely different aesthetic going on, especially because of Brian in those years.”

A comparison, the producers say, would be Jan and Dean — who had really good records. “Jan was a very talented guy.”

“But those were more about creating product rather than trying to express something artistically.”

According to the producers, they hope the upcoming set does well, so they can continue creating boxes like “Feel Flows.”

“There’s still some amazing material in the vaults. We would love the opportunity to share it with everybody.”