Odd-Berta: A lion in downtown Calgary? Oh my 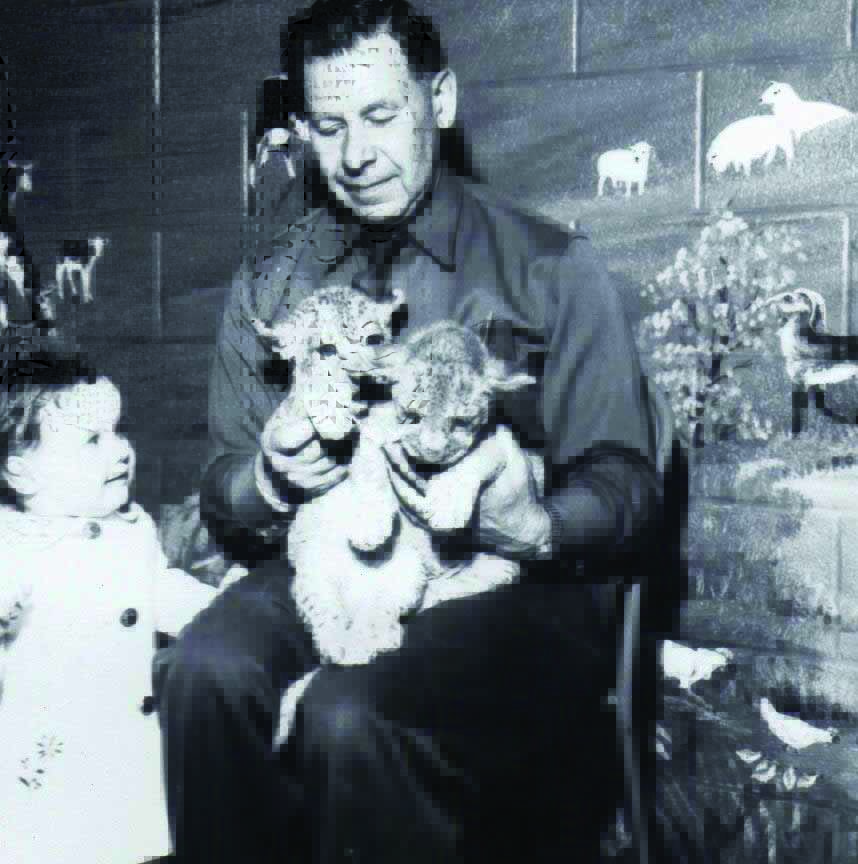 Twins: A young girl admires two of the lion cubs under Stewart's care, in the late 1950's.
Send a Letter to The Editor

“I hope you won’t mind — I’m bringing home a lion cub.” My great-grandmother Doris Sluth, reported hearing her husband, my great-grandfather Stewart, utter these exact words during a phone call in 1958. Although Doris hoped he was joking, she knew her husband was serious about this, given who he worked for at the time. Stewart was the former head zookeeper of the Calgary Zoo where he worked from 1942 until he retired in 1969.

In a written feature, printed in the Weekend Magazine, Volume 13, No. 13, of the Winnipeg Tribune, my great-grandma, recounted the entire affair to a journalist named Frances McNab. For the first time, I was reading my own weird family history as a narrative told through the eyes of someone on the outside. I was drawn to that because I do that kind of work every day for the Alberta Newspaper Group.

It took me months to track the full feature down. I knew it existed because the story is practically lore in my family. Unfortunately, my grandma’s partial newspaper clippings, now coming up on 60 years old, are yellowed with time, and the date and publication were impossible to make out. I scoured the Calgary Herald’s archives, the archives of Southern Alberta publications, and scrolled through pages of information on Google. Several searches pointed me to Glenbow Museum archives, where I came across new photos I hadn’t seen before of my great-grandpa Stewart Sluth, until I finally came across the headline I had been searching for: “We Raised a Lion In Our Apartment”. The bold headline, admittedly much more interesting than any headline I have written, was followed up with a floating line of reassuring text which read, “There was never any danger- Cindy (the lion) was always well fed.”

In searching for stories and destinations for my Odd-Berta columns, it occurred to me that this small piece of bizarre family history might just be worth sharing once again.

Doris recounted the disbelief when her husband informed her of his plans to convert their downtown Calgary apartment into a temporary lion’s den. Surely in the hundreds of animal specimens he was responsible for, there must have been something in need of help that was easier to hide in a pet-free apartment, or easier to feed; perhaps something less carnivorous?

“When I saw what my husband was holding as he stepped forward. I felt very foolish. Making the same weak sounds as a newborn kitten was a ball of fluff, only a few hours old; blind and helpless. When I saw what he had in the other hand I began to laugh. It was a doll’s bottle filled with milk. ‘Picked it up on the way home,’ he grinned.”

Of course, contemporary criticism would be correct in the assertion that Cindy, a wild animal, has no place in a downtown Calgary apartment, but the issue of animal welfare and conservation was a much different topic in the 1950s, regardless of why she was taken home in the first place.

“They brought her home from the zoo to nurse her back to health. They actually brought her over to our house as well, she was just a kitten,” my grandma, now 87, told me. The whole story of Cindy’s passivity and gentleness seems a bit unreal but my grandma nonchalantly confirmed Cindy would, “sit quietly on the couch,” when they brought the lion over for a visit, which they did, “many times.”

Cindy, a symbol of a great huntress and predator, was nothing of the sort, but Doris was certain the building’s caretaker would nonetheless not be impressed to learn of her residency. Far from the idyllic stereotype of the 1950s family concerned with keeping up appearances, Doris and Stewart Sluth were more concerned with trying to keep a lion-sized secret from their neighbours and landlord. Doris described the sneaking around as a logistical nightmare. They were total badasses.

“Hiding her was nerve-racking. Besides the suspense of being discovered with her in the apartment, twice a day we had to risk a breathless dash down the hall with her so that Stewart could take her with him to his office.” Doris explained a 10-day-old lion cub is manageable to hide, but within the first week, she began getting too large and wriggly to be hidden on the inside of his jacket. “We were never very adept at our smuggling (…) We were obviously out of character laughing and hurrying through the hall with strange bundles.” Doris added they felt guilty having to keep all the entertainment and amusement to themselves.

Doris said once the word was out amongst the other suspicious tenants, they began to drop by unannounced for tea, sugar, or any other excuse they could use to see a glimpse of whatever secret was being kept behind the doors of their second-story apartment. Turning the radio all the way up, my great-grandparents would usher Cindy into the small bathroom until they were able to satisfy the guests that there was no funny business. Eventually, Cindy was discovered by the building’s caretaker during maintenance to their refrigerator.

Doris sat down, with Cindy on her lap and, “straightened up and prepared for the showdown.”

Doris, with her dry humour, told him, “you’d better be nice to me, for she’s very ferocious.” Rather than anger, she was instead met with intrigue and curiosity from Mr. Cheney who was won over after petting Cindy, and promised not to tell a soul. “My eviction worries were over,” said Doris.

Doris recounted plenty of mishaps, including one particularly comical episode where she informed a local vet that her lion had ingested a frog. The vet, perfectly convinced she was unstable, nearly turned white when she marched Cindy into the examination room to have her looked at. “Finally, the assistant said in a horrified whisper: ‘She wasn’t crazy. It is a real lion.’ And she scuttled behind the door, barricading herself in.”

Doris told McNab they never intended on keeping Cindy for more than a month, and when once she had become healthy again, it was time to return her to the zoo, for good. “The day she left I shut myself in and cried and cried. It was three days before I could go back to work and weeks before I could hold back the tears when Cindy’s name was mentioned,” said Doris. Years later, Doris and Stewart moved out of their small apartment into a house. Cindy would return to their care after becoming bone-thin and on the verge of death unable to eat. One day Doris thought to make Cindy an entire batch of rice milk pudding, with six eggs. Doris said things turned around for Cindy who was able to return to the zoo after a few months.

Eventually, my great-grandparents found themselves again, temporarily housing another lion cub named Penny, and then four more during Stewart’s tenure with the zoo. “I hate to take away any of the glamour or courage you may think it took to live with lions. But there never was any real danger. They were handled so much, right from birth, that I think they became partly human,” Doris told McNab. Reading this story back 60 years later, I thought to myself, “so this is why I love cats.”

In my digging, I learned my great-grandparents, who passed away long before I was born, named Cindy the Lion after a poem by Ben Jonson, a 17th-century English playwright who wrote the titular Cynthia as a “queen and huntress, chaste and fair.”

In my casual hunt to find a story, I gained access to all these nuggets of information and was able to make connections to my own life. As a poet and writer, I felt like I was reading between the lines of my own lineage, my grandpa’s upbringing, my mother’s upbringing, and so my own. We trace webs of our family histories to situate ourselves and try to bring context to our lives.

While this is visually helpful, the particulars of the identities are lost; not because of apathy or negligence, but rather, as a consequence of time. This odd story doesn’t represent a concrete place you can visit. Instead, it is an invitation to interrogate our perceptions of what is weird or intriguing and how we fit into those narratives which keeps us curiously reflecting on our own oddities. Happy hunting.