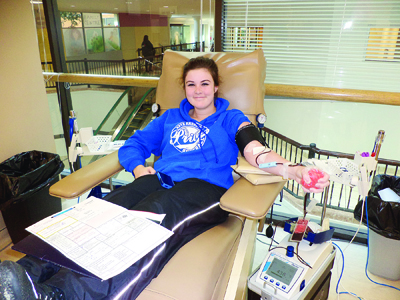 This year, the Coaldale Cares blood drive received 98 donations towards a yearly December goal of 100.
“We were very close,” said Belinda Tomiyama, territory manager for Canadian Blood Services donor relations in Alberta and Saskatchewan, located in Lethbridge Centre.
Tomiyama, who has been with the organization for the past 10 years, added this was the seventh year Coaldale Cares was in action. The initiative ran from Dec. 1-31, 2014. “Coaldale Cares is the only initiative of its kind. Where a whole town adopts the clinic for the month of December. There’s no other town that does it in southern Alberta,” said Tomiyama.
According to Tomiyama, Coaldale Cares is supported by Kate Andrews High School (KAHS) and Intercontinental Truck Body (ITB) in Coaldale.
“They asked the citizens of Coaldale to come down and donate. To make sure patients are receiving the ‘gift of life’ that they need,” she added.
Donors headed into the Lethbridge clinic to donate during the month of December and Tomiyama said there was a tracking box in the clinic and donors dropped in a chip to inform the clinic they were donating on behalf of Coaldale Cares.
Historically, Coaldale Cares began after one of the owners of ITB, who passed away in 2012, was diagnosed with cancer.
“They had approached about doing a blood drive, as well as having KAHS — they were really interested in doing a blood drive — and it just grew from there,” said Tomiyama.
She added the Town of Coaldale also shares information about the initiative on the town’s website each year. Tomiyama said there’s a constant need for blood.
“Patients are receiving transfusions every day. We ask people to help us keep up the blood supply. It’s a voluntary blood supply here in Canada. People have to come to us voluntarily to give blood or our patients don’t receive the treatment that they need.”