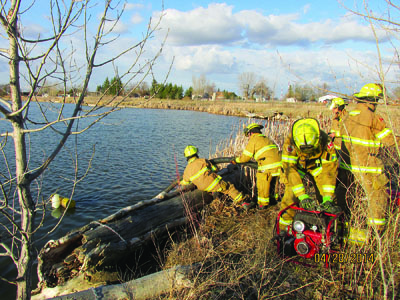 A town’s fire department is a vital piece of the safety puzzle needed to make a community safe and a place to live, work and play.
Coaldale Emergency Services (CES) Fire Chief Andy Van Rijn recently submitted a year-end report to the Town of Coaldale council.
“We set a record last year, which blew the old one out of the water,” said Van Rijn.
In 2012, according to Van Rijn, there were 306 calls, in 2013 there were 302 and in 2014 there was a new record set of 342 calls.
“The bulk of those would be medical assist calls. We help if it’s a delta call, which is a life-threatening call, then we will go out and give the ambulance a hand. Sometimes we end up driving the ambulance or we just help get the patient ready for transport,” he added.
CES, Van Rijn noted, also helps with lift assists such as if there is a heavy patient or if someone is in the basement of a house with narrow stairs and ambulance personnel can’t get the person out.
Van Rijn said CES responded to 16 code red calls in Coaldale, which means there were no available ambulances in town and CES treats the patients and has to wait for an ambulance to arrive at the scene out of Lethbridge or Raymond. “We end up spending a lot of time with the patient. That’s a bulk of our calls — medical assist calls.”
Recently, Van Rijn told council, there wasn’t any big grass fires reported in Lethbridge County over the last year and then soon after there was a big grass fire north of Lethbridge.
“We were out there for three-and-a-half hours working. That was the biggest thing,” said Van Rijn.
Van Rijn said he feels CES is being used by Alberta Health Services because CES doesn’t get paid for medical calls — a notion he soon hopes can be rectified. “We hardly have any contact with AHS managers or nobody comes to say, ‘How’s it going? Can we help you? Is there something we can do to make your job easier?’” said Van Rijn, adding CES does though have contact with ambulance personnel.
Van Rijn has been instructed to come up with a history of medical assists since AHS has taken over the ambulance service in Coaldale, which will be sent off to the Alberta government in hopes of some changes being made to the system. “Even if they paid us $50 a call, just to help us pay our supplies. That would help quite a bit. That’s my next project, to get that into council.”
CES responded to 212 medical calls out of 342 calls last year.
Van Rijn also noted false alarms were up last year with 32 in-town calls and eight in the county.
“Everybody that puts an alarm system in their house now, as a bonus they get a fire alarm, as well. If they burn toast or burn supper, it sets off the alarm and then most people don’t answer their phone when the alarm company calls because they’re busy doing something and we show up at their door. We also do carbon monoxide calls. When somebody’s carbon monoxide detector goes off, we go out there,” said Van Rijn.
According to Van Rijn, CES had six gas smells or funny odours in a house last year.
Van Rijn said there were also five structure fires in the town and nine structure fires in the county.
CES attended 21 motor vehicle accidents in the county, which Van Rijn said is down and eight in town, which is also down.
Public assist calls are also a part of Coaldale Emergency Services.
“We did calls during the flooding in June and we went and sandbagged and laid pipelines,” said Van Rijn, adding in the county, CES did public assists such as standby for the foodgrains harvest.
In the county, there was over $3 million in fire losses last year and $3 million of it, Van Rijn noted, was a potato storage fire and explosion.
In town, Van Rijn added, there was only $82,000 in property loss and $650,000 in property loss was saved.
“When we put out a fire in a house, we take the value of the loss away from the value of the property and that’s what we saved,” he said.
Van Rijn said the CES contract expires with the county at the end of the year. “This is my last year. That is one of my last focuses I told the town committee when we start meeting in February and going over and reviewing the contract. Although we have had an excellent working relationship, with regards to our contract for the last 10 years with the growth in the town and county, it is time to look at it to see if it still meets our needs,” said Van Rijn.
Lastly, Van Rijn said, the way firefighters are getting paid isn’t working well. “They get an honourarium. I think the town’s been after us for a while to go to a set wage for a volunteer, if they go and fight a fire,” said Van Rijn.
Right now, according to Van Rijn, volunteer firefighters receive a lump sum payment. “We’re very blessed. We have a full crew. We have 35 volunteers and I think a lot of other departments in the county are struggling to maintain volunteers. I work very hard at keeping a full crew,” said Van Rijn, adding four firefighters also completed EMT training last year.