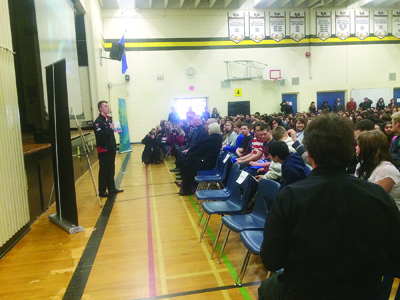 A 16-year-old racing phenomenon from Red Deer is launching a new program to educate elementary and junior high school students about the dangers of distracted driving. Parker Thompson is on a mission to travel across Alberta to provide his peers with good advice on staying focused when behind the wheel.
”In racing, I know that taking my attention off the track for even a second can have serious consequences, and it’s no different when driving on our roads and highways. By educating a new generation of Albertans about the dangers of distracted driving, we can prevent a lot of collisions before they happen,” said Thompson, in a recent media release.
Thompson was born and raised in Red Deer and got behind the wheel of his first kart at the age of eight. Starting later than most of his competition, Parker moved up through the karting ranks swiftly. He went from being a weekend warrior, rolling a kart and toolbox in the back of a family half-ton in Calgary, to a championship-winning fixture in many of the world’s top karting events.
Research, according to the release, indicates driver distractions contribute to 20 to 30 per cent of all collisions and distracted drivers are three times more likely to be involved in a collision than attentive drivers.
“Students are our next generation of drivers and Parker is taking the initiative to share valuable lessons, so others can develop good behaviours before getting behind the wheel. Students are seeing how a split-second decision can change lives forever,” said Wayne Drysdale, minister of transportation, in the release.
The end-goal is to travel throughout the province. Alberta Transportation and Thompson prelaunched the “Drive to Stay Alive” campaign in Edmonton last week.
“What I’m looking for is to secure some sponsorship and some funding for the rest of the year and I want to make it a definite year-long campaign,” said Thompson, on the phone after his campaign prelaunch at an Edmonton school.
Right now, Thompson noted, he wants to focus on Alberta by getting distracted driving statistics down at home in the province first before possibly heading out across the country with his important message for students. At the prelaunch of the campaign, Thompson said, students were extremely receptive to his message and what he was saying.
“It helps with my race car background and with me being 16 years old, I think they put themselves in my shoes and I’m one of them basically. I’m a teenager and they understand it all. The message was received very well and hopefully we see some lives saved,” said Thompson.
The message is simple — distracted driving is dangerous. “We’re looking to do a province-wide campaign and just bring down the numbers of distracted driving,” he noted.
Right now, three out of 10 crashes on Alberta roads are distracted driving-related.
“With it being 23 times more dangerous than driving focused and six times more dangerous than driving under the influence — it’s a huge problem here at home. Basically, I’m looking to target the youth, so that we can change this generation, so we don’t have this problem in the future,”
“The main plan is I want to go from school to school province-wide campaigning against distracted driving and teaching the kids how dangerous distracted driving is.”
The program, according to Thompson, would be educational videos about how dangerous distracted driving is. “It teaches them a little bit about my background and race car driving, which keeps them pretty interested. Then we also have a simulator that I use to train. It’s a VRX simulator. It’s what I use before I go to every track I race at. We’re going to bring that to every school and do some excersises with the kids and teach them first hand how dangerous distracted driving is,” said Thompson.
“I really wanted to give back to the community of Alberta — they’ve treated me very well, with me being only one of the race car drivers that comes from Alberta, I get a huge amount of support from the community. I wanted to come up with something that helped the community of Alberta. I thought, being a race car driver, this tied in perfect. I’ve got some good information and good experience driving cars and it gives me good insight to teach them how dangerous distracted driving is,” said Thompson.
Quick facts about distracted driving:
* If you’re travelling 100 kilometres per hour, you will travel the length of a football field in the time it takes to send a text message (approximately five seconds).
* Since the legislation came into effect there were 60,216 convictions for distracted driving in Alberta (Sept. 1, 2011 through Mar. 31, 2014).
* There were 25,913 convictions for distracted driving in Alberta last year (Apr. 1, 2013 to Mar. 31, 2014).
* Ninety-six per cent of these convictions were for using a hand-held electronic device while driving.
* Male drivers account for two-thirds of all convictions.
* Young male drivers, aged 22 to 34 years, have the highest conviction rates.
Alberta’s Distracted Driving Law:
* Alberta’s distracted driving law restricts drivers from:
– using hand-held cellphones
– texting or e-mailing (even when stopped at a red light)
– using electronic devices like laptop computers, video games, cameras, video entertainment displays, and programming portable audio players (e.g., MP3 players)
– entering information on GPS units; and reading printed materials in the vehicle. And writing, printing or sketching.