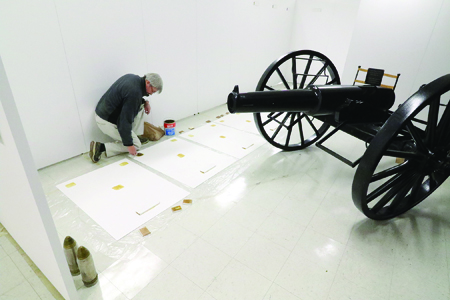 At a regular Lethbridge County council meeting held Feb. 5, HL Col. Wayne Peterson from the 20th Independent Field Battery, RCA was part of a delegation to discuss possible funding for the Lethbridge Military Museum. According to a report submitted to council, the total project cost is $140,000 with $103,000 of the funds raised to date. The recommendation to council was a request to apply for Land Trust Reserve Funds through Lethbridge County, as a grant of $10,000. Timing of the funds for the project, the report stated, is summer/fall 2015.
Lethbridge and area, Peterson explained, has a tremendously wide and rich military history but it doesn’t have a museum to properly display and share local military history.
“The museum project would provide an opportunity to enhance the community knowledge, understanding and appreciation of local military history. It also presents us with an opportunity to collect, display, observe and research certain military artifacts,” said Peterson, adding obviously there is a need.
Lethbridge County, Peterson said, virtually has lost all its WWI veterans, many WWII and Korean War veterans — along with their stories and artifacts. “Had a military museum been established many, many years ago — a lot of that would have been preserved and provided a focal point for the recognition of the history,” he noted.
According to Peterson, the Lethbridge Military Museum would highlight those who served in the Canadian Forces, indicate the role Canadian citizens have played in military history over the years and provide an education opportunity for Lethbridge area schools and youth groups to be able to access this resource.
“Our citizens are interested. We’ve had a military unit in Lethbridge since 1908. We have huge Remembrance Day crowds and they seem to be getting bigger. That’s a plus and a minus. Obviously, the plus is, over the last eight or 10 years we’ve had some active military involvement around the world and we’ve also had some sacrifice,” said Peterson, adding many people will benefit from the military museum including citizens from the City of Lethbridge and county, as well as the independent field battery.
The Lethbridge Military Museum will be officially opened on Apr. 18, with the official ribbon cutting at 2 p.m. An open house will be held at the field battery between 11 a.m. and 4 p.m. “Various displays have to be constructed between now and then to be ready for that.”
“This isn’t something that’s just started. In September of 2011, we started with a bit of a brainstorming session and a museum committee was struck,” said Peterson.
Peterson added the committee started developing governance, operating policies, story lines and layouts to be possibly used for the museum. The next year, he said, committee members turned to research and development for displays. Display counters and cases plus much more have been put into place leading up to a spring opening and unveiling.
One other major part of the museum project, Peterson noted, which will take another possible year to complete is a mural. Funds, from a grant the museum committee would like to apply for with the help of the county, would go towards an interactive electronic component of the mural project, slated tentatively for the spring of 2016.
The Lethbridge Military Museum will be open Wednesdays and Saturdays from 12-4:30 p.m. Admission is by donation. To book a tour call 403-929-4265. For more information e-mail lethbridgemilitarymuseum@gmail.com.