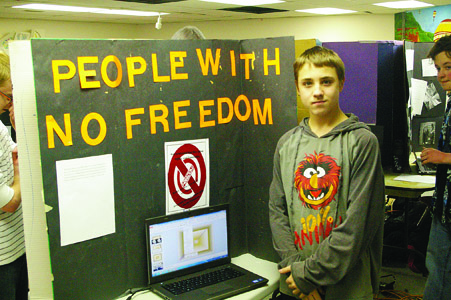 Human rights were at the forefront last Tuesday afternoon, as junior high students from St. Catherine’s School in Picture Butte held a human rights presentation downstairs at the Picture Butte Municipal Library.
Students from Grades 7-9 set up displays to highlight selected human rights issues.
“We started with an idea last spring about looking at wrongs that have been done against humanity and crimes committed against humanity in history and the fact that they keep happening. The idea, of those who know history, are they still doomed to repeat it?” asked Language Arts teacher Janet Clamp, as she kicked off the student presentations. Each of the students incorporated a power point they created and a public service announcement.
Social Studies teacher Brian Dawydiuk added the students examined the 30 articles stated in the United Nations Declaration of Human Rights.
“They ended up choosing something that fit at least one of those 30 articles. Some of the kids found things — something like genocide would effect more than just one of them — so they were able to find that maybe five or six of the articles were affected by their issue but they had to pick an issue that fit within those 30 articles of the Declaration of Human Rights,” he said.
In Language Arts, Clamp noted, the class started the process by watching the movie “The Giver,” followed by a discussion about utopian societies and why they work and why they don’t work.
“To look at some of the things that are wrong with decisions that human beings make. From there, each student chose an independent novel study that may or may not have related to the same human right they were studying in Social Studies. Some of them wished to branch out and look at more than one,” said Clamp.
After the independent novel study, Clamp said, students summarized everything together and created an advertising campaign, a video commercial and a magazine advertisement advocating for change.
Two students involved in the presentations had a firsthand experience with censorship, which began to unfold during the selection process of a human rights topic.
“First of all, me and my friend, we were at first going to do a topic that was marriage rates. Basically, same-sex marriage and the history of it, and important dates and important people but because of our school system, we were restricted from doing that. Censorship sort of spoke out to us because we experienced it firsthand,” said Grade 9 student Daisy Teneycke.
The students chose the topic of censorship, specifically in China.
“This is because, basically the government in China, controls a lot of aspects in the citizens’ lives. It affects everything from Internet to media, music and TV shows and even morning cartoons for children. They heavily censor it for not only morals but also cultural reasons to keep their culture, as the government, says ‘pure.’ Another reason they do it is for politics — to kind of hide any type of scandal or anything that the government could be doing that is bad,” said Teneycke.
Another student, Jayden Richardson, chose to talk about the so-called conspirator, traitor and anti-hero Guy Fawkes from English history.
“What I did was the right of no one can take your right of freedom. I actually searched it up and there are people that actually take it away from you. The government in some countries actually do it,” said Richardson, a Grade 8 student.
Richardson explained, from what he learned from research, Fawkes fought for people to actually have freedom. “He blew up the parliament,” said the passionate student, as he recited one of the famous poems written about Fawkes — “Remember, remember. The fifth of November.”
What Richardson believes the poem means is — nobody can take the right to freedom away from an individual. “But if somebody does, go and fight for it. He went and fought and did it and people actually did get their freedom,” added Richardson.