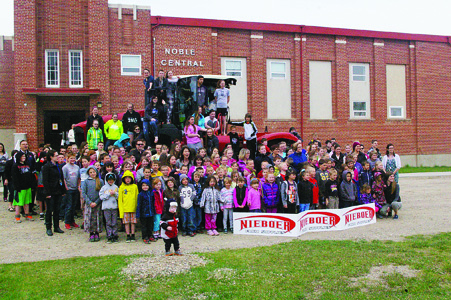 Noble Central School students in Nobleford, as well as students from Picture Butte High School (PBHS), learned what it was like to go hungry during Noble Central School’s 24-hour Famine last week.
But, what made the event even more special, was students filled a tractor with non-perishable food donations, collected prior to the Grade 7-12 24-Hour Famine, which ended last Friday morning with a pancake breakfast.
The food was donated to the Picture Butte Food Bank and the tractor was donated by Nieboer Farm Supplies.
Students from PBHS, who are also collecting food in advance of their 30-Hour Famine and community food drive May 2, also showed their support by sharing what they’ve collected so far. The event was organized by Noble Central School’s student council with President Taylor Holtorf at the helm. The event was intended to raise awareness of world hunger.
“I’m so excited with it,” said Holtorf, but when student council was planning the initiative students didn’t quite know how to make it work and make it a success.
One of the ideas was to hand out garbage bags door to door in Nobleford for food donations. The bags were left by students last Thursday and collected last Friday morning.
“Over half the community put food out on their front step that we were able to pick up. I’m just so proud of everyone. The school, the community and everyone who helped out to make this a huge success,” Holtorf added.
Kathy Oviatt, principal of Noble Central School, said it was because of the good work on part of the students that it was such a success.
“It’s the community and the school working together to raise awareness for hunger and to raise awareness within our own community of kids who are in need,” noted Oviatt.
Oviatt explained it was the school’s student council taking it upon themselves to raise awareness about world hunger.
“They had the idea of doing the 24-Hour Famine, so they could create some empathy for children who are hungry. Then they extended it through the whole school because we are a K through 12 school. They gave our elementary students the opportunity to not go for 24 hours but to actually miss a lunch and go for one day,” said Oviatt.
A pancake breakfast was served the morning after the 24-Hour Famine to provide students a chance to go hungry and then have somebody actually help out and feed them.
“The credit goes to our student leaders in our school who came up with the idea,” she added.
The spin-off from filling the tractor with food donations and the entire event, Oviatt said, is kids not only have an awareness for this one event but they’ll continue to remember it. “They’ll continue to take leadership opportunities and continue to do what they can within the community and within our school.”