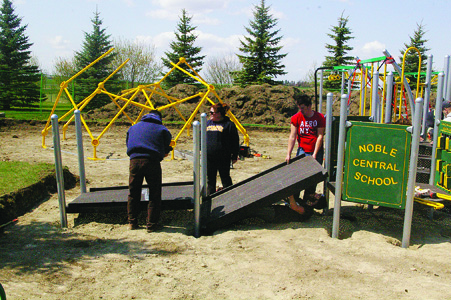 During the 2010-2011 school year Grade 6 students at Noble Central School in Nobleford initiated a playground project, as part of an action research project in Social Studies.
Last week, a five-year student-initiated journey culminated with a community effort to build a new playground, with funds raised by the students — now in Grade 10. Close to $112,000 was raised through grants and fundraisers held by the school. The school has amassed close to $130,000 through gifts in kind. Noble Central School serves approximately 200 students from early learning and Kindergarten to Grade 12.
Following the students who helped kick start the new playground campaign, the next year’s Grade 6 students, now in Grade 9, began the daunting task of fundraising.
According to a recent media release from Palliser Regional Schools, Grade 6 Social Studies teacher Desiree Lamb noted each successive group of Grade 6 students over the years has chosen to continue work on the cause, with support from Brenda MacMillan, chair of the Nobleford Parent Association, who became the project’s grant writer.
The media release stated the new playground will have elements specifically sized for preschool-aged children, as well as older students. It will also be wheelchair-accessible and feature 10 slides and a large “beehive” climbing structure.
“For a teacher, I think the ultimate goal, for me, is to see my students go out and contribute to the community or to society,” said Lamb, in regards to the students involved with the initiative over the years.
Lamb noted, the school prior to the new build, had a really old playground.
“It was really not safe for our little guys and it had to be torn out because it wasn’t safe,” she added.
It’s really exciting for the most part, said Hayden O’Brien — one of the students involved in the project.
“Just knowing we started all the way from the bottom and planning it all,” she noted, adding the students even started collecting pennies to go towards fundraising efforts.
Now, O’Brien said, watching the playground being built after reaching their goal is a relief.
Initially, another student Graycie Heavyshield said, the group had no idea what the cost for a new playground build would amount to.
“We knew it was going to be quite expensive, more than one class could handle really, just from us,” said Heavyshield, adding the group came up with a variety of fundraising ideas including making homemade silly putty out of Borax and food colouring, bake sales and students sold solar eclipse glasses to the entire school and in the community. The group also received cheques from local businesses and parents.
Students, Heavyshield said learned how to be patient because students were told the project was going to take quite a long time to complete.
“Finally, seeing this happening is just amazing,” she noted, as most students were much younger when the project began.
Lamb noted parents and community members came out over this past weekend to lend a hand with the build.
“We had one of the local companies that paid their men and they’re paying their wages,” said Lamb. A few Nobleford Fire Department volunteers also came out to help and residents from other communities.