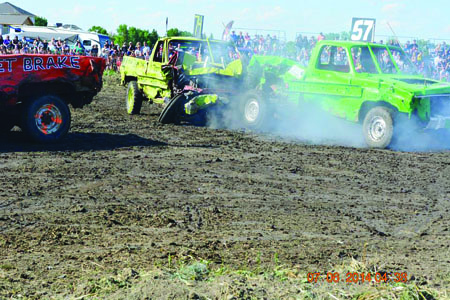 If you grew up in the 1980s, you would most likely remember the kids’ classic toy Smash-Up Derby. The Kinsmen Club of Coaldale have brought the love of smashing up cars to life.
Carnage in Coaldale isn’t a no-holds barred fight to the finish wrestling or UFC match but it is a cavalcade of cars certainly meeting their demise. It’s crash, boom, bang once again as the Kinsmen Club of Coaldale proudly presents the 6th Annual Carnage in Coaldale Demolition Derby June 6. A rain delay date has been set for June 13.
Organizer Jack Van Rijn said the demolition derby has grown to be a highly popular event for the Town of Coaldale and the immediate area and over the past five years has raised over $70,000 with 100 per cent of the net proceeds remaining within Coaldale and district.
“We’re looking forward to putting another derby on that’s going to be larger than the previous ones. We’re expecting a field of cars in the neighbourhood of 35-40,” noted Van Rijn.
A new aspect to this year’s derby, Van Rijn added, is the addition of a truck class.
“Last year we tried it and it was quite successful. Now we actually have a truck class. When it comes to demo derbies, it’s probably the most violent type of racing there is. It will be quite something to watch,” he said.
Van Rijn explained organizers will only allow experienced drivers to enter into the truck class. “Because of the danger aspect to it.”
Coaldale, Van Rijn said, is part of a demolition derby circuit that goes throughout Western Canada and the one in Coaldale is one of the first derbies to kick off the season.
“Actually, we are the first demolition derby,” said Van Rijn, adding the circuit starts in Coaldale and makes its way up north and to communities such as Vulcan and Vauxhall and into British Columbia.
Carnage in Coaldale is also a significant fundraiser, not only for the Kinsmen Club of Coaldale, but for the Coaldale Food Bank and the Coaldale Kinette Club.
“We limit the food vendors for hamburgers and such to those two community groups, so we can keep the money within our community,” said Van Rijn, adding this year vendors will be providing face painting and balloon-tying for the kids and a variety of different activities.
There will be beer gardens and live entertainment from 11 a.m. until 10 p.m. The carnage kicks off at 1 p.m. south of Coaldale on Highway 845, past the new storm pond on the west side of the road — follow the signs.
Full-size and mini cars and trucks to be safety tech’d by 11 a.m. sharp.
The location site this year has been slightly modified due to construction.
“We are in the farthest southwest corner of Cottonwood. We’ll be able to hold it there this year and possibly next year,” said Van Rijn.
Van Rijn noted John Nikkel, who farms directly south of the venue, has generously donated approximately five acres of land to help with parking.
“That was very nice of him to forgo seeding of that area, so we would have a place to park.”
Remember, no pets allowed and bring a lawn chair. Admission is $5 and kids 10 and under get in free.
According to Van Rijn, there will also be a raffle car to be won.
“That’s something that’s kind of a crowd favourite. Whereas, for the price of a $10 raffle ticket we sell throughout the day and then about a half hour before the main event we pull the lucky winner’s name, and we equip them with all the safety gear that’s required and we give them a quick briefing on what they have to do in the demolition car and we give them our blessing and we kick ‘em loose and they’ll have a lot of fun,” he noted.
A portion of the funds raised from Carnage in Coaldale goes towards the Friends of Jennie Emery Society.
“We have given them some money already for the playground they want to build there. That’s one project we’re working on,” said Van Rijn.
Another project the Kinsmen Club of Coaldale is helping monetarily with is revisiting the Coaldale Skateboard Park.
“We’ve had some issues with deteriorating equipment and some vandalism that we need to address. We’re going to try and do some fundraising to mitigate some of those concerns that were brought forth to us by the town,” he added.
For registration information contact Jay at 403-795-8510 or Lee at 403-312-7022 or e-mail contact@coaldalekinsmen.com. For more details or to download a registration package visit online at http://www.coaldalekinsmen.com.