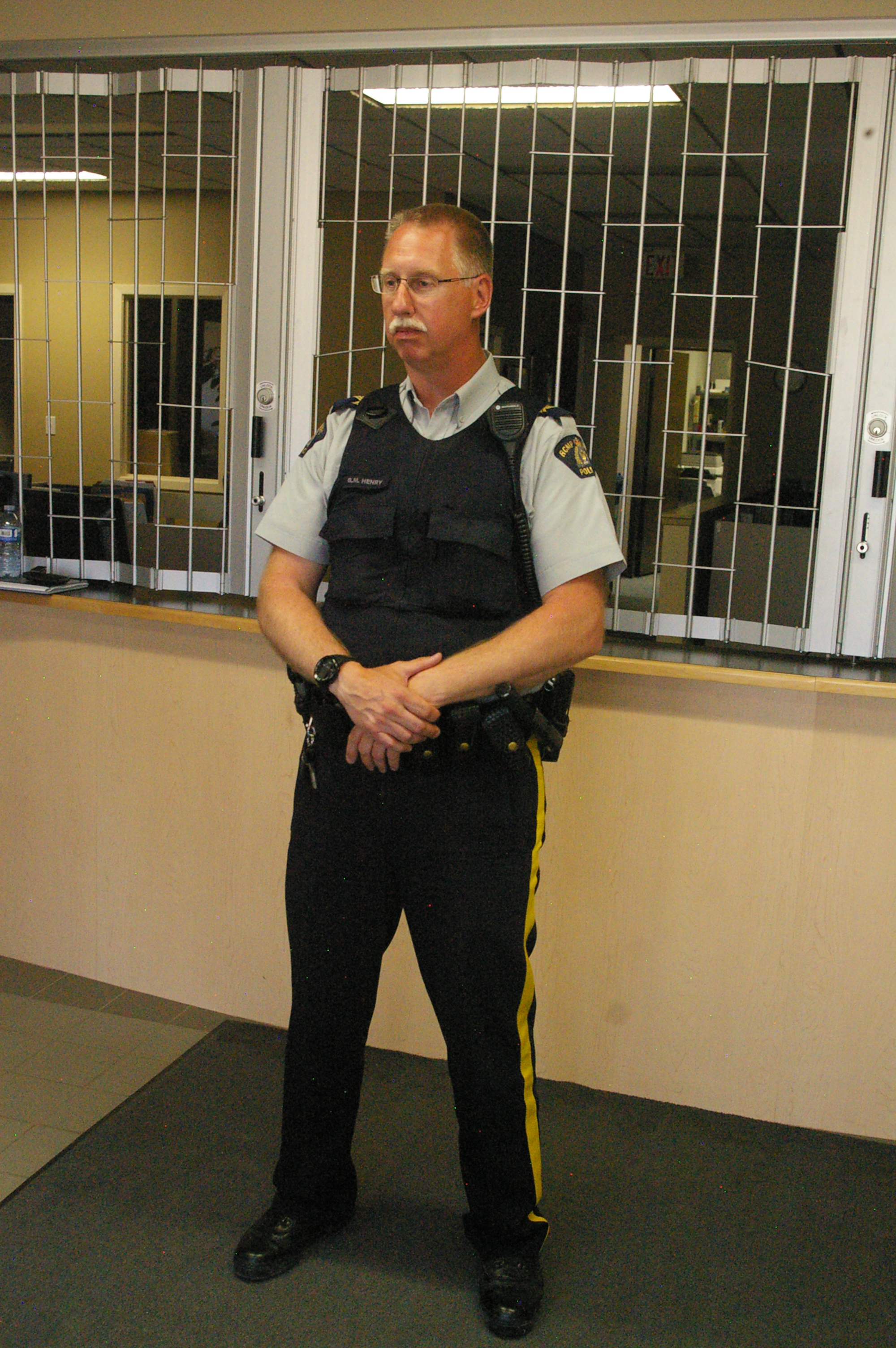 Glenn Henry is Coaldale’s new RCMP detachment staff sergeant, when policing service transitions from Lethbridge Regional Police Service (LRPS) to RCMP Jan. 1, 2016. An RCMP delegation paid a visit to Town of Coaldale council during a recent meeting held June 8 to provide a quick update on the transition. Insp. Glenn de Goeij, acting officer in charge of corporate and client services branch for “K” Division, began his report with an introduction of the new detachment commander.
In terms of the corporate level of the upcoming transition of policing service, deGoeij noted, land has been secured for the regional facility to be built.
“We are currently in the design phase and we anticipate that be completed this year and moving to a construction phase in our fiscal, which runs from April to March 2016-2017. With occupancy slated for 2018,” he said. “Which is good news.”
It is hoped by next spring, de Goeij added, there will be some type of sod turning ceremony, as a move to the construction phase takes place.
In the interim, he said, the RCMP has been working closely with the Town of Coaldale’s Chief Administrative Officer (CAO) Kalen Hastings and town council and plans are proceeding for the storefront office to be up and running by Jan. 1, 2016 — located out of the town office.
“That’s another good progressive step. We anticipate the Municipal Police Agreement with Public Safety Canada will be here in time for and be signed off prior to Jan. 1 but as a stop-gap measure, should that not happen, we do have the provisions under the provincial police service agreement that you will fall under there for a short period of time — if that agreement doesn’t materialize because of perhaps a federal election or other priorities of the federal government is working on and doesn’t happen to get here,” he added.
In terms of the transition of policing service to the RCMP, de Goeij said, work is well underway and on the corporate side everything is on track.
“We’re pleased at the progress we are making and we’re looking forward to moving ahead.”
Insp. Tony Horomi discussed the operational aspects of the policing service transition, as he spoke to town council and staff.
Horomi noted the RCMP has met with LRPS to collectively come up with a list of action items that need to take place.
Some of those items include the 9-1-1 switch over from Lethbridge to the RCMP systems.
“We require quite a bit of technological input and what not, so it’s things like that we’ve discussed with LRPS in terms of a transition. We put a list together,” said Horomi.
Horomi added someone is assigned in the Lethbridge detachment to look after the finer details, in terms of the acquisition of the vehicles, the firearms and other aspects of transitioning.
The largest milestone, according to Horomi, are the renovations to the town office to start operations.
“Operationally, I believe we are on track — unless there is something unforeseen that we haven’t accounted for. Part of the thing about having Glenn (Henry) come, sort of ahead of the curve, is for him to oversee those finer details to make sure everything is in place,” said Horomi. Henry’s relocation to the area is subject to his house sale in Chestermere, AB.
Henry said he grew up in Edmonton, as he introduced himself to town council and staff.
“I grew up in a small town just outside of Edmonton and joined the RCMP in 1985. I first posted to Saskatchewan,” Henry noted, adding he spent some time in the Northwest Territories and did a mission in Kosovo for a year.
Henry came to “K” Division in Alberta and served in Edson, Red Deer and Chestermere for the last six years.
“I’m very pleased to be coming here,” he said.
Part of Henry’s rationale of coming to the area, he said, is Coaldale is a potential retirement location for he and his wife.
“I’m not going to retire tomorrow, by any means, but I think this is a place that would be well-suited to our lifestyle and hopefully to my talents,” said Henry.
Henry is no stranger to transition, as he was involved in a transition in Chestermere, helping to build a new detachment.
“Those new found skills may help here, as well. It is my hope and desire to grow with this community and to be the best police service we can,” said Henry, adding there will be some limitations and growing pains.
“But, what I think with what I see now, we have a good team and there’s some good things going to happen here shortly.”