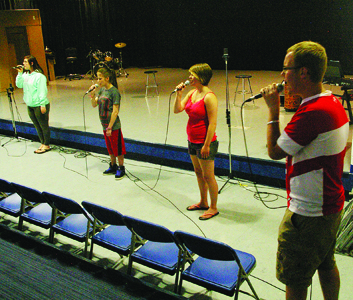 Artists are aplenty at Picture Butte High School — from drama to band to choir to an assortment of art work — the high school features it all.
Last week, PBHS held its annual farewell to the school year evening of the arts with a jam-packed evening of top-notch entertainment for the whole family, including two drama productions.
“The class has been working on productions for the second semester of school and we’re putting on two plays. One is a superhero support group and the other one is a dinner murder mystery,” said drama teacher Kerri Masnyk, during rehearsals last Tuesday afternoon.
The productions featured a mixture of students from Grades 10-12.
“A couple of my Grade 11 students, who are in 30-level drama, are directing,” she added.
Masnyk said the fine arts night also featured the junior and senior high bands, a high school choral group, as well as high school art classes with art on display.
“It’s just an opportunity for PBHS to showcase the wide-variety of talents and activities that we have going on at the school. We’re known for athletics but over the past few years we’ve been really pushing our arts program. Our band group just came back from Calgary again for a national band project with the whole division of Palliser Regional Schools,” said Masnyk.
According to Masnyk, the evening of the arts is held twice a year — a Christmas extravaganza and a spring show.
Tanya Conrad, the school’s band and choir teacher, said one of the performances was by the senior choir, which performed four numbers.
“We have some that are choreographed, some with different drums and stuff. We’re just trying to put it together,” said Conrad, during rehearsals.
Conrad said she is always excited to showcase all the talent at PBHS.
“They work so hard all year and this is kind of like there big performance to show everybody what we’ve been doing,” added Conrad.
When an opportunity arises, Conrad noted, people should come out to support the arts in the community.
“Because, it’s alive and well.”