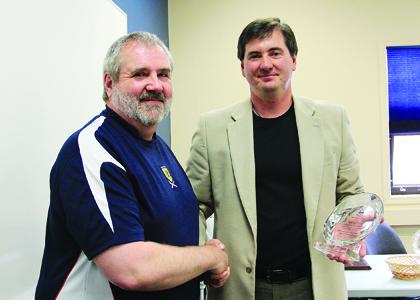 Palliser Regional Schools will miss the school division’s recent retirees, including Wayne Tate, a Hutterite colony school principal — who officially retires today.
Tate was a part of Palliser for 31 years, including a few years under the County of Lethbridge and Palliser umbrella in the past. Tate was principal of a total of 17 Hutterite colony schools but this year took on a partner.
“I had a partner this year, which was kind of cool. This was my sixth year doing that. The first five I did it on my own. My predecessor, of course, had did it on their own. This last year, Palliser added a second Hutterite colony schools principal and that was Danny Roberts. We spent this year collaborating on all matters Hutterite. It was good and it was a lot of fun,” said Tate.
Tate got his start within the Palliser Regional Schools division at Noble Central School (NCS) in Nobleford, as a teacher but prior to that was employed at Catholic Central School in Lethbridge and at the University of Lethbridge, as an academic assistant.
Tate said Don Zech, who is currently a trustee on the Palliser board, was the principal at NCS and Tate became vice-principal. He also did a stint at Coalhurst High School and Kate Andrews High School in Coaldale.
According to Palliser, Tate was also involved with the Administrators’ Association, which Tate said had a rotational system. He was once a chairperson for the organization and acted as secretary and took on other roles over the years. Tate noted he also had the opportunity to try and shape the organization a little bit differently. “It was a very good experience,” he said.
So, what are Tate’s thoughts about leaving 35 years behind?
“As most people would say, it’s bittersweet. There have been an awful lot of changes. I’ve always been a teaching administrator, for the most part, high school English. For my first five years of doing this work, of course, there is no highschool English to teach. I really miss that. This last year, Danny and I had a teaching component and that was so much fun to get back in the classroom with the kids. The kids keep you young and they keep you humble,” he joked.
Tate said the teaching aspect with kids is the most faithful constant in a teacher’s career.
“They were with mine. They were always the joy and in spite of all the changes, I’ve seen over those years, that part of it just hasn’t ever changed — the focus on kids. The exuberance of youth. We kind of tap into that as teachers a little bit,” said Tate.
As for Tate’s time in retirement, he said he is going to spend some of his days de-cluttering.
“I’m one of those guys who, right up to the last minute, they think I might need that again, so I’ll just put it in this pile or I’ll put it in this box in case I need it. I had been at the colonies for a few years before I finally gave up all my Shakespeare units. I think the first thing is probably just to de-clutter and sort out those piles and spend a little time this summer doing a little short travel, just day trips to visit with family in the prairie provinces. My wife and I have just booked airline tickets to Scotland. I guess that will be the celebration. We’re going to do that later in the fall,” said Tate.