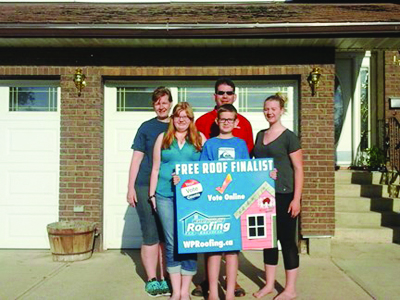 With No Roof Left Behind — the Lee family in Coaldale has been nominated for a free roof from Waterproof Roofing.
“There are four finalists that are in the area,” said Heather Lee, adding the initiative is similar to Habitat For Humanity.
Lee said there are also nominees from north Lethbridge and from Hardieville.
Historically speaking, Lee said, the roof damage on her family’s home came from a pesky bat problem back in 2012.
“We had bats in our eaves to the tune of about $5,000 to get rid of them,” said Lee, and insurance doesn’t cover bat damage.
A concerned Coaldale citizen noticed the Lee household was in need of a new roof due to years of taking a beating from bad weather and the bat damage included. The Lee family has done a lot in the community over the years and could use a hand, in regards to replacing their roof.
“The idea of us going out and paying for a roof at this point in time is not in the near future reality. I wish it was,” said Lee, and the family has moved on despite many challenges.
Being nominated, Lee said, comes with a catch.
“We need to get our community to rally behind us and to vote for us,” she said.
According to Lee, this is the first time the campaign has ever been run in southern Alberta. “But, it will be a yearly thing. This is the big inaugural event,” said Lee.
The one with the most votes, Lee said, wins and voting ends July 24.
To vote, check out the Waterproof Roofing website at http://www.wproofing.ca and the link No Roof Left Behind and select the Lee family.
Lee pointed out the campaign has been running in the United States for many years.
“Roofers noticed their neighbours’ roofs were in serious need of help,” said Lee, adding the roofers decided they needed to do something, as the country was in a recession at the time and people didn’t have money to fix their homes and the roofers thought, if the homeowners lost their roofs, they would lose their homes.
Lee said the roof is one of the most important parts of the structure of a home. The Lee family has called Coaldale home the past 18 years.