It’s cliché but Wilson believes kids are our future 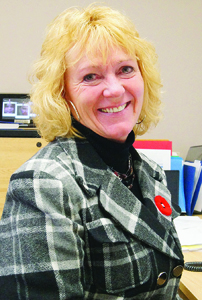 Palliser Regional Schools has many women of influence in Lethbridge County schools and on staff, including Director of Learning Laurie Wilson. “For a lot of years she taught Kindergarten in Coalhurst. She still goes to every high school grad in Coalhurst because she still feels invested in every one of those kids. For the last few years, she has been our expert in inclusive education, and supporting teachers to support students with special needs,” said Dawn Sugimoto, from Palliser Regional Schools. Sugimoto added Wilson works with staff in every school in the division and leads Palliser’s Academic Wraparound team of experts, which goes out to work with classroom teachers about specific students teachers feel they’re not quite yet reaching.
“It might be someone who is gifted and needs more challenge in the classroom or a student who is struggling. The team has been getting very positive results from its work across the division. The strategies and suggestions they have for the teacher of the one student inevitably wind up benefiting others in the classroom. Earlier this year, Wilson was part of a presentation on Academic Wraparound and on Palliser’s model for inclusive education at a national conference on rural education and she’s one of our in-house trainers on violence threat risk assessment,” noted Sugimoto, adding Wilson is absolutely amazing. “The difference she makes to teachers and students is immeasurable,” she added.
Wilson said her focus at Palliser is on the students and inclusive education focuses on all students. “Getting away from what used to be known as special-ed,” Wilson pointed out.
Under Wilson’s umbrella, she explained, are special needs kids and family school liaison councillors. Wilson said it’s the education of all students but particularly for those who are struggling or those who need a greater challenge. This marks Wilson’s fourth year as a director of learning for the school division and prior to the latest position, Wilson was a principal and vice-principal within the Palliser region of schools, which included Coalhurst.
According to Wilson, she loves her job but missed being with the students, so she devised a plan. “I came up with this idea, that I called the Academic Wraparound. It was based on work from another colleague. I thought, if we could have teachers come to the table to talk about particular students that they were having a hard time helping or they just didn’t know quite how to reach them or that sort of thing, perhaps we could bring a team of ‘experts’ to the table — to help them with strategies or ideas to help rejuvenate them or just to get more ideas in their toolbox,” said Wilson. The idea was put to the test at one school and according to Wilson, had great success.
“We said OK, we need to branch this out. We opened it up and now we’re into our third year and it has gone amazing. We’ve reached something like 55 teachers and I think the last count was 89 students,” said Wilson, adding Academic Wraparound reaches schools from Calgary to Coaldale. This past year, the Academic Wraparound was held on Tuesdays and the initiative is already booked into a new school year this fall.
“It looks like we may have to expand it. We have a literacy coach that comes with us and a technology integration specialist from our district. Palliser supplies a half-day sub for each school, as long as it warrants the time, of course. The support from the district is phenomenal for this. We are always getting comments from teachers saying, ‘Thank you. This is so helpful.’”
Wilson feels as though with this project, she is reaching the kids through the teachers, which is great news.
Aside from her work with Palliser, Wilson is a PAL reading volunteer with Coalhurst Elementary School (CES) and she has two grown girls of her own.
“Because I spent so many years at Coalhurst Elementary School, I try to always go to their sports games and their awards. I sponsor an award at CES, kind of the Unsung Hero Award,” said Wilson, adding she has only missed one high school grad at Coalhurst High School in over 20 years.
Wilson said she loves kids and she knows it’s cliché but she believes kids are our future.
“I think teaching is the most important job in the world, next to parenting,” said Wilson.