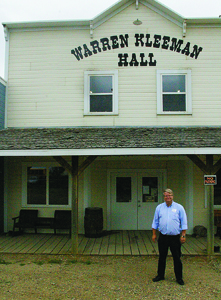 Coyote Flats Pioneer Village, located at the Prairie Tractor and Engine Museum just outside of Picture Butte, is smack-dab in the middle of one heck of a busy summer and that’s good news for Pieter L. van Ewik, the village’s new general manager. Peiter has been on the job for the past ten weeks but grew up in the Netherlands and was employed in the manufacturing and management sectors for many years. “I’m loving the job that I’m doing,” he said, adding this is the first season a general manager has been hired at the historic village. This year, Pieter said, the board thought they needed someone to answer the phones, to book tours, to give tours, to prioritize the work, to identify projects and so on.
“One of the things I do is I have a volunteer to-do list. If you like painting, boy there’s two or three painting projects. If you love carpentry, I’ve got work for you. If you can spare a day, there’s a couple of big jobs. If you have only three hours, there’s a smaller job. That’s working really well,” he noted.
According to the new GM, there are weddings and family reunions booked. As for the weddings, couples can use the old church for ceremonies and head over to Kleeman Hall for the reception. At a recent family reunion, organizers expected 200 guests. On top of summer rentals of the facility, many summer programs for kids visit. During the school year from mid-May until the end of June students visit the village. This year, Pieter noted, almost 650 students and teachers paid a visit.
Kids hang out and take part in a nature walk, an abbreviated tour of the village and kids take a look at about four or five buildings. “Little kids don’t have that much interest in little artifacts. But, we talk about the history of the village and then we have our old fashioned playground and the kids just love it.”
“We let them climb on tractors. A lot of kids, the demographics are changing, a lot of them are city kids and this is the closest they’ve ever been to a tractor. They get to sit on it and pretend they’re driving,” he added.
Volunteers are an important aspect of keeping the village’s historic tales alive and well, with between 20-25 volunteers usually at the village to lend a hand and approximately 60-65 volunteers come out for big events. Right now, Pieter said, volunteers are helping to restore two tractors and fixing up a 1918 Case 2040. There are also three additional paid staff including a special events co-ordinator/tour guide, oral history co-ordinator and a part-time janitor.
When visitors enter the time machine into the village, they can either check things out on their own or take a guided tour from one of the senior tour guides. One tour guide’s baby clothes are also on display in one of the buildings. “That connects history. They love talking because they lived this history,” he said. Recently, Coyote Flats played host to a show and shine held earlier this month. “Next year’s car show is booked for July 2. We are really excited. It exceeded our expectations. We would have been quite content if we had 75 cars or 100 would have been really good — we had 123. It was fantastic. We weren’t expecting that many cars,” he said, as he explained Piyami Cruisers used to host the event but were not able to continue.
Coming up at Coyote Flats, Pieter noted, Harvest Days will be held Aug. 14-16 and will coincide with Picture Butte’s Jamboree Days. Coyote Flats will feature horse pulls, tractor pulls, kids games, drinks and snacks and good eats and ice cream. “We’ve got our own concession this year,” he mentioned. Pieter said a tractor pull will be held the Friday at 6:30 p.m. and on Saturday from noon until about 6 p.m. Sunday there will be a breakfast from 8-10 a.m. followed by a threshing demo and horse pulls at noon.
On Sept. 12, it’s the Prairie Tractor and Engine Museum’s annual Pig Roast and Tractor Pull. Admission to Coyote Flats is by donation except during Harvest Days when admission is $10 for adults, $5 for kids 12-18 and kids under two are free.
Coyote Flats is open Tuesday to Saturday from 10 a.m. to 5 p.m.