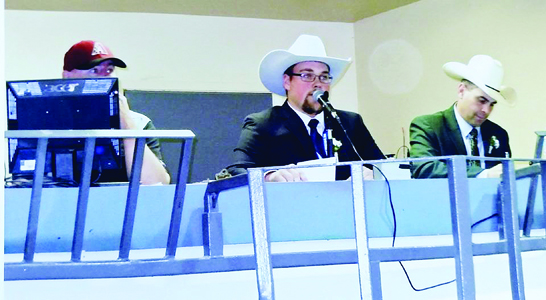 Not only does being a top-notch auctioneer take rhythm and timing, it also takes livestock knowledge — or at least those are some of the criteria the Calgary Stampede uses to determine the best of the best in its yearly International Livestock Auctioneer Championships, which was held July 11 in Calgary.
Nobleford’s Ryan Konyenbelt, 18, finished as the Top Canadian in the Top Four spots out of 27 in third place. The other three positions were awarded to auctioneers from the United States.
Konyenbelt also won Top Rookie of the Year.
“I really wasn’t expecting to get that far in the competition. The calibre of auctioneers that were there were second to none. Best in the world, really. Lots of great auctioneers from Canada and the United States. There’s been guys out of the States that have been selling cattle for 30-40 years. Here I am at two years,” said Konyenbelt, who added he was honoured to get that far in the competition.
For the Rookie of the Year title, Konyenbelt believes, an auctioneer has to be selling cattle for less than five years.
“I started about two or three years ago, I’m not even sure how long it’s been,” he joked.
According to the award-winning auctioneer, he started selling at the auction market in Picture Butte, prior to moving to Vermilion to attend Lakeland College.
“I was bored the second day of classes there. I went and knocked on the door at the auction market and got a job and I said I like sorting cattle and I would like to do a little bit of auctioneering,” he said.
So, he was put to work on the auction block selling cows shortly thereafter. He also started work at an auction market in Lloydminster.
“I sold at two different auction markets during college.”
When Konyenbelt returned to the southern Alberta area, he already had a job lined up in Fort Macleod at the Southern Alberta Livestock Exchange.
“That’s where I currently am, as a sales rep and an auctioneer,” said Konyenbelt.
As the Calgary Stampede website states, “Thirty-five? Thirty-five? Would you bid a thirty-five? Who’s gonna bid it at a thirty-five bid? This year marked Konyenbelt’s first Calgary Stampede competition but he did compete in Winnipeg in a Canadians competition in the spring. His first foray into the competition game but not his last.
“I’m hoping to maybe go to the qualifiers for the World’s Livestock Auctioneering competition. But, we’ll have to see,” said Konyenbelt.
His recent win certainly boosts his auctioneer ego, if you will.
“It boosts your confidence. Every auctioneer has an ego, it’s just a little one, we like to say but it would be nice to continue on and get a little bit better and learn more from other auctioneers at the different competitions,” he noted.
Konyenbelt’s Calgary Stampede results are as follows: Friday Average of 3 – 85.250, Saturday Average of 3 – 92.333, overall aggregate 177.583.
The Calgary Stampede website states the fastest mouths in the west and live auctioneers from around the world took part in the 27th annual competition this year and were judged on rhythm, clarity, voice control, livestock knowledge and their ability to spot bids and conduct a sale.