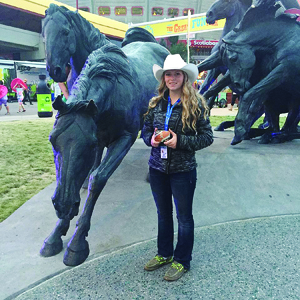 Bailey Wauters (17), recently went to a Summer Synergy cattle show in Olds, Alta. and also returned with a Calgary Stampede scholarship in hand, said her proud mom Sandra.
“She was awarded a Calgary Stampede $2,000 scholarship,” Sandra noted, adding the cattle show in Olds was the stepping stone for Bailey’s recent achievements.
Bailey will be attending Grade 12 at Kate Andrews High School in Coaldale this upcoming school year.
Sandra said her daughter has been around cattle most of her life and is in the Readymade 4-H Beef Club.
At the cattle show in Olds, Sandra explained, participants earned points for everything they did.
“Depending on how they did, they earned more points. As the number of points accumulated, they accumulated scholarship points and what not.”
Sandra added Bailey and other winners initially started out going to Calgary earning a $1,000 scholarship.
“Then they had to do an interview — a panel of three people interviewed them in Calgary from the Calgary Stampede board. She was able to earn another $1,000.”
Sandra said Bailey is pretty excited because she didn’t really have plans to go to school.
“But now she is getting some money, it’s like, ‘Maybe I’ll have to think about going to school now,’” she joked.
This is a first-time win for the scholarship winner. Sandra believes there were 320 participants at the Summer Synergy cattle show in Olds.
“Out of that — there were 55 that got scholarships between juniors, seniors and intermediates.”