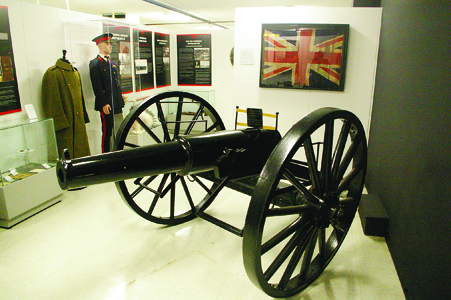 What are Canadians doing to pass the military history torch to the youth? “Generally speaking — the veterans, doesn’t matter First World War or the Afghanistan War — veterans don’t talk about their experience,” said Glenn Miller, from the Lethbridge Military Museum.
So, how can history buffs like Miller or facilities similar to the military museum talk veterans into sharing their stories?
One way for military history to be preserved is to ask for pictures or artifacts passed down from generation to generation from family members throughout the county, southern Alberta, the province, the country and across the globe. Every family has a story.
Case in point, the Lethbridge Military Museum does just that. It preserves the stories of veterans.
Miller is passionate about military history, especially history from around the area. And, he’s quite knowledgeable about the subject.
Recently during a tour of the facility, Miller explained Lethbridge’s military connection goes back to 1908. Over $125,000 has been raised in funds from various donors to open the doors of the must-see museum.
“We wanted it to be a professional museum with the goal being accredited under the military system, as well. And that takes a bit of time, just like through the Alberta Museums Association, to be an accredited museum there’s certain requirements and standards to do that,” he noted.
Miller said, right now, the museum is working at getting accredited through the military system but it may take a few years.
“That will allow us to send people away to train and also work with the other military museums in exchanging artifacts,” said Miller, adding the museum officially opened to the public Apr. 18. The museum is located near the Lethbridge Airport.
If you look at Canada’s history, Miller said, Canada’s history is very militaristic in nature.
“Even sending people off to Egypt, the Nile — way back when. It is ironic as a country, less than 150 years old, today’s generation doesn’t know what three generations ago did,” he said. And, Miller wants to change that.
Miller added, in Europe they’re over 1,000 years old — and many Europeans know their history.
“We don’t even know grandpa’s history,” he joked.
People today, Miller said, if they have stuff military-related, it means nothing to them. “That was grandpa’s old watch. What does it mean to me?”
Miller encourages county residents to contact him if residents are in possession of any old military-related items from a barn or attic before being thrown out or sent off to a garage sale or thrift store. What may be junk to some may be military history from the area.
“There’s always a bigger picture that connects different dots to help tell a story,” noted Miller.
According to Miller, the first military unit in Lethbridge was the 25th Independent Battery.
Lethbridge’s military museum is located at the Vimy Ridge Armory.
“We have an existing space, which is temporary, our final home is going to be on the other side of the armory,” said Miller, adding all the walls of the museum are transportable and the time of the move is subject to government funding.
The next phase of the museum, according to Miller, is to protect the artifacts as much as possible, starting with lights illuminating the displays.
“These type of lights need to be replaced with LED, which is better for the artifacts. Which is part of the standard for museums. We only have so much money, so we’re constantly in the fundraising aspect. But, now that we’ve had those donors over the last three of four years, we’ve got something tangible to show them. This is where your money has gone and thank you very much and we’re well on our way.”