SMRID tour shows irrigation is a part of social fabric 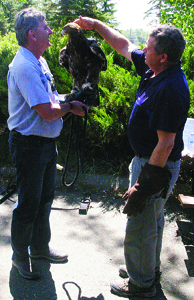 Irrigation is one of southern Alberta’s greatest accomplishments — providing the region from Medicine Hat to Pincher Creek with water for a plethora of reasons.
On July 29, southern Albertans including local councillors and provincial and federal politicians were invited on a St. Mary River Irrigation District (SMRID) Tour, which highlighted how irrigation is a part of the social fabric.
“That not only is water for irrigation used for irrigating but there are other uses,” said Terrence Lazarus, SMRID general manager. Other uses include recreational purposes, wildlife mitigation areas and wetlands.
Because of the security of water and because of the certainty of irrigation water, Lazarus noted, southern Alberta has a wide-variety of industries including the McCain’s plant and Frito-Lay.
“McCain’s is not going to invest $100 million dollars into a plant or Frito-Lay — if there’s not security,” he added.
“When you start looking at that infrastructure around irrigation and the jobs that come with that, it’s enormous,” said Lazarus, adding those aspects are what the recent tour was trying to highlight. The tour was a first of its kind but the SMRID has held other tours with a focus on infrastructure, which has included the many canals in the area.
According to Lazarus, even though agri-tourism is not his expertise, he believes the industry is enormous.
“On the tour we drove by a hemp plant. Further in our system, there’s dill and there’s mustard and there’s a guy that’s producing spearmint oil. Agri-tourism is huge. What the potential is? I don’t know,” he explained.
Basically, Lazarus said, the tour was to focus on what the connection is between irrigation and everyone living in the region.
Tour stops included visits to the St. Mary Dam, Raymond Hydro Power Plant, Monsanto plant, Green Prairie hay plant, Broxburn Greenhouse, a demo farm and a lunch break in Coaldale with a Birds of Prey demonstration.
One of the tour participants, Jennifer Nitschelm, said the point the SMRID wanted to make was irrigation isn’t separate from the community — it’s part of the community.
“Everyone is connected in some way. Whether they’re directly an irrigator, whether they’re working in an industry that supports irrigation or whether they work in a small town. That’s somehow connected to the irrigation industry,” said Nitschelm, manager of basin water management branch through Alberta Agriculture and Forestry, irrigation and farm water division.
Lethbridge County Coun. Morris Zeinstra, also a participant on the tour, said irrigation is one of the most important aspects of the land from Medicine Hat all the way to Pincher Creek.
“If it wasn’t for irrigation, there wouldn’t be much going in southern Alberta. Just think about what the City of Lethbridge is. The City of Lethbridge grew — not because of the coal mining that was there — it grew because of the irrigation and the irrigation is the big thing,” said Zeinstra.
Town of Coaldale Coun. Jack Van Rijn found the tour to be enlightening.
“People don’t realize what it takes to get water to the end product. In other words, the crops that we grow and what this country would be like, without the water we do have. One of the interesting things I found out was if they were to stretch out all the canals system and all the underground pipe infrastructure that the SMRID has, they would reach all the way from here to Toronto. That just goes to show how much infrastructure that we have,” said Van Rijn.
The SMRID is Canada’s largest irrigation district delivering water through 2,060 kilometres of canals and pipelines to approximately 390,000 acres of land south of the Oldman and South Saskatchewan Rivers between Lethbridge and Medicine Hat. The SMRID is also responsible for the delivery of water for numerous towns, villages and rural residences — as well as industrial water supply for commercial operations within the district.
The SMRID operates within five separate counties including Lethbridge County, County of Warner, M.D. of Taber, County of Forty Mile, and the County of Cypress.
During the tour, participants stopped by Coaldale for lunch, which came from Broxburn Farm, located in Lethbridge County. “We wanted to promote local support, local growth and local economy,” said Stephanie Lau, from the SMRID, adding irrigation takes the water to grow the local vegetables (such as corn and potatoes) to produce the local food. “It’s not just eaten locally or purchased locally but it’s exported, as well,” she noted. “Everything is within 100 kilometres. Everything is either organic or locally grown. Our water came from Nanton Springs — bottled water,” she joked, adding Frito-Lay also donated chips and beverages came from Pepsi Co., another local company.
“It’s all about community and social fabric. We want our MLAs and our council members to understand how we knit together from the farmer and the irrigation from us to the companies to the economy and to really good homegrown food,” said Lau.