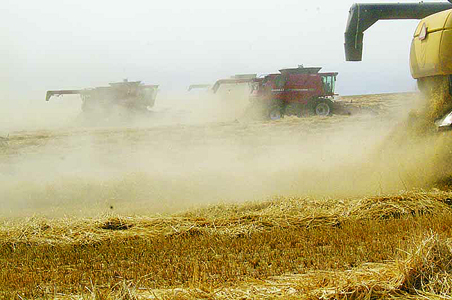 Bringing home the harvest for those in need is what community members did last week and this Thursday, as the Picture Butte Growing Project Harvest Day was held last Thursday and the Coaldale/Lethbridge Community Food Grains Project Harvest Day is being held Thursday, after a cancellation last week. Larry Penner, media contact for the Coaldale/Lethbridge project, provided a few comments heading into this week’s harvest day. This is the 7th year for the project.
“We’re very excited in a year that has had as many challenges with hail storms and drought that the crop is ripe, the crop is mature and it looks as though there’s a reasonable crop there, which we’re excited about. We have pre-sold the grain and straw at an auction a few weeks ago and the proceeds of that, approximately $150,000, worth of grain and straw, have been pre-sold off of the quarter-section,” said Penner. Penner added with the government matching funds 4-1 — $150,000 times five is $750,000, with funds going directly to the Canadian Food Grains Bank. “There’s very few projects where if you put $1 in, five dollars goes to help people in need. This is one of those,” he noted. The Coaldale/Lethbridge project will be held north of the Hamlet of Chin and the Picture Butte project was held north of ‘Butte on Highway 25.