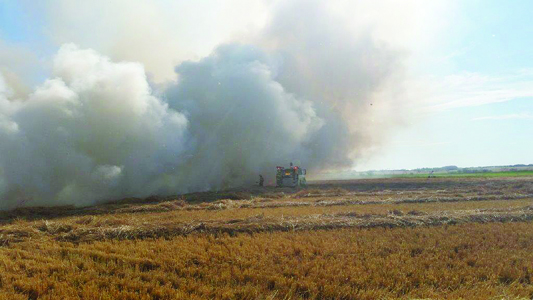 According to Coaldale and District Emergency Services (CDES) Fire Chief Andy Van Rijn, since July 31 CDES has responded to 39 calls.
“That’s a heck of a workload for our guys. And a lot of them are working calls. We’ve had hay shed fires, one combine burned up in a farm yard and we’ve had two stubble fires with combines involved. We’ve had crashes,” said Van Rijn, adding recently there was a motorcycle crash and the police were looking for the guys, as they took off on foot. A gas line rupture in Coaldale, was another call, where the team was out attending to it for four hours in 32-degree heat with all the gear on, Van Rijn noted.
“The one combine fire was when it was 38 above — our guys were out. We had a 35-foot motorhome fire in Coaldale. It’s just been crazy,” he said.
But, the one issue Van Rijn would like to comment on, are the two stubble fires.
“The farmers didn’t have any equipment on site. We always tell farmers they should have a water truck or a disk in the field, so if there was a fire they could contain the fire before we get there. The last one we went was kind of dangerous because the fire was getting bigger and we’ve got guys on foot out there and fire trucks running around and finally a couple of neighbours showed up with disks,” he explained.
“We’re lucky with the two fires we had there was no wind,” said Van Rijn.
This has been a tough summer for CDES, Van Rijn added.
CDES responded to 39 calls in June, 34 calls in July and before the end of August the number of calls was at 39.
Van Rijn said he’s really proud of the department, as hard as they’ve worked and he would like the community to know how hard the men and women work at CDES but also throughout Lethbridge County.
Recently, Van Rijn explained, CDES switched to a new Smartphone app, and firefighters now can be dispatched through their personal phones.
“I think more and more people are getting it,” said Van Rijn, in regards to the new app Active 9-1-1, which costs the department $411 U.S. annually. The new app allows Van Rijn to send texts and let firefighters know about training sessions and other important information.
“It comes up with a map and shows us where we’re going,” said Van Rijn, adding a firefighter can also let Van Rijn know if he/she can respond to a call. Van Rijn said the department is trying to make it more user-friendly for the volunteers. He added Taber and Coalhurst also use the app. “There’s quite a few out in the county now.”