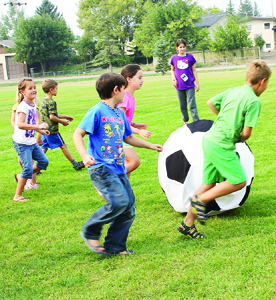 A group of young people in Coaldale had a unique opportunity to foster physical literacy over the summer.
The Play program at Jennie Emery Elementary School has been in operation for 6 years as a before and after school program, which also carries over into a summer program.
This summer 9 to 12 year olds in the program were able to take on a leadership role with the younger students in the program.
Paige Rauda, now in her fourth year as co-ordinator of the program, said she had been looking for something for the older kids to keep them active and involved in the program when she learned about the PLAYCoaldale initiative.
Stephanie Wierl, community services manager for the Town of Coaldale, has been providing information on the physical literacy program to the PLAY program leaders at Jennie Emery. Rauda said the two of them got together and decided to collaborate over the summer.
She said it was Wierl who suggested a junior leadership component for the summer program grounded in physical literacy.
“It was fantastic,” said Rauda.
Mondays throughout the summer Wierl worked with the older kids, about 25 of them, on leadership skills and ways to plan activities, which fostered physical literacy. The older kids then led the activities for the younger participants.
Rauda said it was incredible to watch the growth in the older kids as they relished their leadership roles and also served as mentors to the younger kids. She also noted an improvement in social skills and their knowledge of physical literacy.
“We want to continue to offer this program for 9 to 12 year olds.”
Joshua McNeil, one of this year’s junior leaders, has been in the summer program for two years.
“I like the PLAY program. Every day they plan activities for us, we have a lot of fun.”
He admits what first drew him to the junior leadership program was the chance to get away from the younger kids for a while, as they tend to be quite noisy.
“It’s so much quieter.”
He liked being in on the planning and presenting of the activities with the other junior leaders and said it was rewarding to see the smiles on the younger kids’ faces after they took part in the activities.
McNeil said he liked being part of the program and learning new skills.
Jaidyn Ashbee was new to the summer program this year and said she also liked being able to plan activities for the younger children. “I think it’s great the older kids get more responsibilities.”
For Ashbee, it was the first time she learned about physical literacy. “It was cool to learn. They test your brain with some of the activities.”
She had a lot of fun in the program this year and she would like to be a part of junior leadership again. She also liked the fact kids who didn’t have a lot of friends at the beginning of summer were able to make friends through the program.
Rauda is delighted at how much the students grew in their self-esteem, competence and leadership over the summer.
She said she also felt the younger kids gained more information and listened better because the information was coming from a peer and not an adult.
Rauda noted the older kids in the summer program are at an age where they will be going into more competitive sports and now that they have some training in physical literacy it will give them more of a base to build on in their sport endeavours.
Wierl said she originally approached the play program at the school with an idea to provide adult leaders with the potential for professional development in the area of physical literacy but it morphed into working with the students on junior leadership.
She said in terms of peer-to-peer teaching, the younger students may have been more receptive to learning the activities from the older students.
“The junior participants connected more with the student leaders.”
Wierl hopes by working with the students on physical literacy it will also provide a connector to the adult leaders.
“There is the hope we planted the seed with the adult leaders.”
PLAYCoaldale is partnering with PLAYLethbridge to bring Dr. Dean Kriellars, a leading expert in physical literacy in Canada, to Coaldale for a one-day workshop. The workshop is designed for coaches, teachers or program leaders working with children 6 to 12 years old.
Participants will discover how to assess children’s physical literacy using the PLAY Tools designed by Kriellars.
Registrations for this day-long workshop, which includes lunch, will open on Oct. 1.
More information can be found on the Educate page in the PLAYCoaldale section of the Town of Coaldale website at http://www.coaldale.ca.
Wierl also noted the Picture Me@PLAY program that has run the past two summers in Coaldale will move indoors this winter. The first Friday of each month, starting Oct. 2, Picture Me@PLAY will be on the ice at the Sportsplex with activities and games during the 1 to 2:30 p.m. public skate.