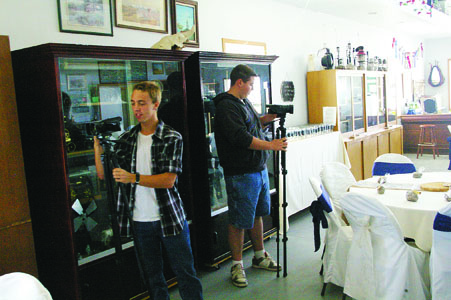 A Governor General’s award is a pretty big deal — just ask Picture Butte High School students who interviewed local seniors about their memories and life history, in regards to historic buildings at Coyote Flats Pioneer Village at the Prairie Tractor and Engine Museum near Picture Butte.
Students, along with the Centre for Oral History and Tradition at the University of Lethbridge, recently received the 2015 Governor General’s History Award for Excellence in Community Programming for their collection of oral history videos. Coyote Flats Pioneer Village will be presented a gold medal by the Governor General of Canada David Johnston, at Rideau Hall, in Ottawa Oct. 16.
According to the project’s co-ordinator Kimberly Lyall, the purpose of the video project was a desire to preserve the knowledge of older residents of Picture Butte and a chance for seniors to share their life stories and memories on video. The project was also a chance for seniors to mentor youth involved with documenting the stories.
“The project was inspired by a Picture Butte High School student who worked for us one summer,” Lyall noted, adding the summer student wondered what would happen to all the stories shared with her by one of the volunteer tour guides — most importantly, when the tour guide wasn’t at Coyote Flats to tell them anymore.
From that idea, Lyall added, a grant was received and the high school was approached and asked to help capture the good old stories of yore. “We just wanted to sit down with our seniors and our pioneers and get them to tell their stories on film. It sounds so simple when you put it that way but when you get young people who are excited and interested out here at this incredible facility, where they start to realize the magic of what history is and what life was and what it is now — things started happening. It was so enthralling to watch these young people get excited, as our seniors were telling their stories and see the connections and the bonds forming, as a result of that,” said Lyall.
Investments were made in the media program at the high school, Lyall noted, with PBHS having one of the most technologically advanced media labs in southern Alberta.
“And the results are — when the class was finished, doing their interviews and their filming — they produced five outstanding videos capturing the heart and the soul of the seniors of this community and the story of Coyote Flats,” she said.
In addition, Lyall added, over 48 life history interviews were produced — to be archived at the U of L. “All of this alone is spectacular, in that, we’ve connected people and helped this community to understand and appreciate history and we saved it. We are making sure, that forever, the stories of the people that founded this place, and built into this incredible community, are going to be saved. That is a gift,” Lyall said.
Lyall said the project can now inspire a nation to celebrate the local history and to bring young and old together. “We never dreamed we would be recognized for creating something the entire country will now look at as a symbol of excellence and something to admire and hopefully, emulate.”
Grade 12 student Dustin Fellger said he was kind of shocked to hear the news about the award win. “Really, wow, that’s amazing,” he said, after the students were told they were receiving the award at a school assembly.
David “Sammy” Richardson, another Grade 12 student, said he wasn’t really sure at first what the award was but then realized it was quite a big award. “That’s something to be proud of,” he said.