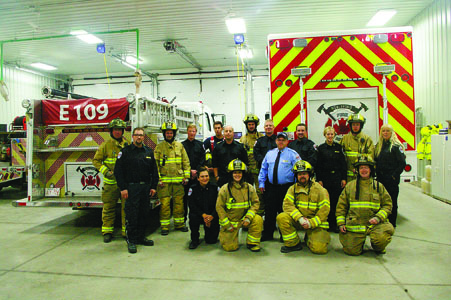 2015, according to Village of Nobleford Fire Chief Ryan Wagner, has been a normal year but a little low on the fire side of things, which isn’t necessarily bad news.
“But, MVC (motor vehicle collisions) and medical has been pretty high. That’s a bulk of our calls — medicals, as with any department in southern Alberta,” he noted.
Wagner added it’s been steady though for the department and the department is on pace to meet normal call count.
Earlier this year, the Nobleford Fire Department held an introductory CP Rail Railway 101 training course for volunteers.
“Phase Two is supposed to happen sometime this fall. As for course load — we’ve got a bunch of guys in courses right now throughout the county and southern Alberta. We’re doing some online courses right now. And, it’s going pretty good,” said Wagner, adding mutual aid training is also very important for volunteers to meet other volunteers from the county.
Currently, the fire department is staffed at 23 but 25 would be the magic number of volunteers.
“We’ve been holding this 23-24 number for the last two years. It’s been going pretty good.”
This year, Wagner explained, the department took on about five new recruits but when new volunteers join up, other volunteers leave the firefighter fold.
“It’s a volunteer department. It’s the nature of the beast, where people are on five or six years and then they move on and do other stuff. The lifespan of an average volunteer firefighter is three years. When we’re marking over the five-year mark, we’re pretty special with having those people on still,” Wagner said.
Wagner also chimed in on the new round-a-bout at the intersection of Highways 23 and 519, which have been troublesome for the department in the past with MVCs and fatalities.
“The progress is improving. They’ve been working at it steady. There’s been some confusion with drivers there. We’ve had a couple small MVCs there. Nothing to the point where we got called. The RCMP — they were fender benders, but they happened there. It’s a construction zone. We’ve had people fly through there going an insane speed and being pulled over by the RCMP, which is nice, because people are on the highway working. You’ve got somebody going 170 kilometres an hour in a 50 — that’s ridiculous,” said Wagner.
Wagner added he’s driven through the round-a-bout but it’s going to be a learning curve for drivers. “We’re not used to that stuff.” And, it’s going to take some time for drivers to be used to the new traffic installment.
As for fires, Wagner said, the area had a fire in the north part of the county in September. “Just some grass and some vehicles and campers,” he said and the department has helped out the Coalhurst department a few times.
“It’s been a slow year for fires,” he noted.
This year’s focus, Wagner said, during Fire Prevention Week is smoke alarms.
“It’s a constant thing because, the sad part about it is, you can never preach about it enough. A lot of houses have them but they don’t have batteries. Some of them are hard-wired into a security system where they go off when you light a match, a little sensitive. But, a sad fact is, when these smoke alarms go off at three or four in the morning, young kids don’t hear it. And that’s the sad fact. So many young children have died because of not hearing the smoke alarm. Training kids to recognize the sound — you can get higher grade smoke alarms that flash lights at the same time. That’s the type of thing that you want to push is the knowledge about it because when you hear it just beeping in the background, it could be anything. You want to train your kids — if you hear that — wake up and go,” said Wagner.
Recently, the Nobleford Fire Department downloaded the new Active 9-1-1 app for communicative purposes — an app, many departments are adopting. Wagner believes the new Active 9-11 app is a great tool for fire departments. “Not just for getting calls and information but for the inter-operations in a fire department for categorizing people, and their platoons and getting the duties done that way. It works great,” he said.
Wagner said the department will also be upgrading their radio system because of so many dead spots in the county — an action plan Wagner hoped would be complete in September or sometime soon.
Wagner said the Active 9-1-1 app was utilized for better communication between firefighters on the department and between county departments. “The radio is so hit and miss,” he said.
“The technology out there for stuff is just great. Even for the stuff on the trucks. We’ve got some iPads on the trucks with this app on there. All the information is right there when you get in,” he added.
Over the last couple of years, Wagner said, the Nobleford crew has been great.
“I’m very proud of the guys for all the training they do and all the hard work they do on the courses and even the after hours stuff — the extra hours it takes to check the equipment and wash trucks. It’s a good family. The brotherhood is fairly strong in this department and it can make or break a department and I’m quite proud of it,” said Wagner.
The number one fundraiser for the department is also coming up Oct. 16. The 2nd Annual Nobleford Fire Fighter Fundraiser, is hosted by the firefighter society. The event is being held at the Nobleford Community Complex with a wing fry from 6:30-8 p.m., a cash bar, a 50/50 draw and door prizes. There is a cost for this event and there are only 150 tickets available. There will also be a live auction from 8-10:30 p.m.
Funds raised go back into equipment for the department. Last year, according to one of the volunteers, funds went to equipping the new command unit. But, this year’s fund allocation has yet to be determined.