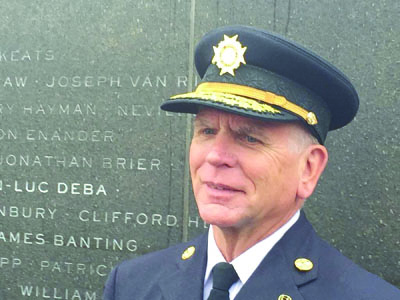 Coaldale and District Emergency Services (CDES) had a record call volume of 42 calls this past August, according to Fire Chief Andy Van Rijn, who retires from his post at the end of the year.
Van Rijn believes everyone should, at a minimum — have working smoke alarms that are tested, a carbon monoxide detector and a fire extinguisher somewhere handy for easy access in a house. And, families should know how to use their fire extinguisher.
“To have a fire extinguisher mounted on the wall — it’s like buying a new computer and you have no idea how to turn it on. People should know how to use it. Don’t stick the fire extinguisher in a closet somewhere behind a bunch of other boxes that you can’t find it. We still find that in businesses, where fire extinguishers aren’t visible. Hanging it behind the stove isn’t a good spot either because if a stove is on fire, how are you going to grab it?” Van Rijn said, adding place an extinguisher somewhere accessible and use common sense in its location.
Right now, Van Rijn added, the Coaldale department is at full capacity for volunteers with a few on a waiting list. “So far, I’ve been very fortunate that way.”
“We seem to stay fairly stable. This year coming up we have two guys getting their 25-year award and one guy has a 20-year award — we have some long-term firefighters on our department, which gives us depth to dig into and keep us going. That’s kind of handy,” said Van Rijn, adding the department also has younger volunteers and the long-term volunteers can share their knowledge. “That’s also a big help too.”
Presently, Van Rijn noted, the department is registered with Alberta Health Services (AHS) as a first responder.
“What that tells us now is we have somebody we can use for a medical director to give some direction,” he said.
Van Rijn said now registered fire departments submit paperwork to AHS and AHS can track the number of medical first response calls.
“This is one way of tracking them. We are all doing it the same way,” said Van Rijn.
On another note, Van Rijn said, it’s an emotional time for the fire chief, in regards to his upcoming retirement.
“To give up the reins after 40 years. If I could just get the head to forget what the eyes have seen,” Van Rijn said.
Now, there’s talk about long-term effects on firefighters, according to Van Rijn. The fire chief recently returned from Ottawa for his brother Joe’s memorial. During the memorial speakers spoke about people who have died of fire department-related cancers.
“They’re not getting run over on the scene or they’re not getting trapped in burning buildings. It’s stress. We go from zero to 100 instantly. Guys are working — might be mowing their lawn, and all of a sudden they get a call for a 60-acre grass fire or a fully engulfed structure fire. They’re subjected to intense heat in a lot of these things and just wearing all that gear — we wear the same gear, whether it’s 30 above or 30 below,” he said.
Plus, there are a lot of unknown toxins being breathed in by volunteer firefighters.
“We have no idea anymore what’s toxic and what isn’t. Even once the fire is out, the guys are taking masks off and you’re walking around in the house but as you’re walking on the floor you’re disturbing all the stuff that’s there.”
Van Rijn explained when his brother started with the fire department, his brother didn’t expect to have to give up his life for it years down the road after he retired. Van Rijn’s brother was on the department for 21 years.
“Do I fear for my life? Yeah, I do. My brother was 64 when he was diagnosed with cancer. I’m 63. Do I have something to fear in the future from all the stuff? I mean, I go for regular checkups but does that mean I’m clear? No, Joe went for regular checkups too and it still caught him by surprise.”
As for long-term emotional effects on firefighters, Van Rijn said, firefighters are just regular people.
“We don’t have some special computer chip in our brain to say OK I see a guy there that’s been badly injured in a crash or killed or a baby died — even if it’s crib death. We know how to deal with it when it happens but then you go home and you play the slide show. You’re trying to watch TV or you’re trying to have supper with your family and all you can see in the back of the mind is this horrific incident you just returned from. Who understands that? Nobody does,” he said.
And in a lot of cases in small towns it’s people you know. Not only is it the incident itself that may affect a firefighter it is after the incident that can cause emotional burnout too. An example Van Rijn provided was firefighters can’t just leave a family member grieving after a death or severe accident.
“It’s a huge emotional toll on firefighters to do what we do. People don’t see the work behind the scenes. They call, we show up. They don’t know how much training we’ve had. All the weekends people give up,” said Van Rijn.
On a lighter note, the fire department’s yearly calendar fundraiser gets underway and will be available to purchase for $10 the first part of November.
“It’s a chance for our guys to go door-to-door and if somebody has a question about emergency services or about smoke alarms they can ask the firefighters. It’s a chance for the guys to get out into the community and meet the people. And it’s another way for the community to show support for the guys that provide the service in their town. Every dollar that comes from that calendar goes right back into buying equipment,” Van Rijn noted.