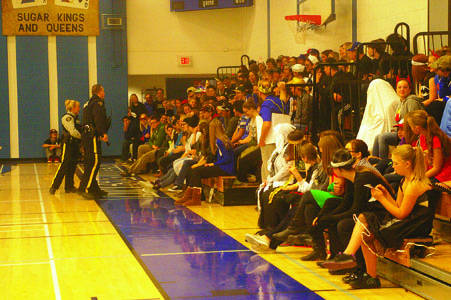 Cst. Greg Dumouchel from the Picture Butte RCMP detachment asked students at Picture Butte High School (PBHS) last Friday how many of them had Facebook. Most of the students put their hand up. Dumouchel told the students there are 1.4 billion Facebook accounts worldwide. He then asked students how many had Instagram accounts and how many had a Snapchat account.
“Social media has completely taken over our lives. Not a lot of people can go anywhere without their cellphones,” he said.
Years and years ago, Dumouchel noted, people used to have diaries and they would put secrets in them. “Nowadays, everybody posts it for everybody to see on the Internet,” he said.
Social media users post almost everything and anything these days including personal information, which can be used by criminals around the world.
Recently, Dumouchel and Cst. Brittany Small returned from a cybercrime summit in Calgary, where a presentation was held featuring the Federal Bureau of Investigations (FBI), Secret Service and an ex-FBI agent now in charge of law enforcement for Facebook.
“Facebook is becoming one of those things where it’s instantaneous and it’s at our finger tips to get information out to the world,” he said.
“Everybody goes online and on social media and they can see up to the minute information.”
Cybercrime has now become worldwide and it’s a problem.
“It’s not just in Picture Butte, it’s not just in Alberta, it’s not just in Canada — it is a worldwide issue right now,” said Dumouchel.
Our country, he added, has evolved and has passed an act, which is a law called C-13.
“C-13 is updated laws in Canada that explain to law enforcement about cybercrimes and cyberbullying.”
One of the main topics of the presentation by the RCMP was in regards to distributing explicit photos.
Dumouchel mentioned to students every camera including cellphone cameras are distinct and as soon as a picture is taken there is information recorded called metadata, which is stored with each picture forever.
He continued, once a picture is posted online it will include an IP address and the longitude and latitude of where the photograph was taken. Law enforcement can use this distinct data information to find out the exact location of where the photo was taken but the data information can also be used by criminals.
“You have to be more aware of what you post online, people are posting very personal stuff, that you shouldn’t. You have to be very, very careful because there’s a lot of people out there who will take advantage and it’s just not kids,” he said, adding adults are often victims to identity theft.
Social media is also used by young and old to chat with friends and others online — whether known to an individual or not known. This can cause many serious problems, as personal information is shared, both real and fake.
Cst. Small shared a story about a 14-year-old girl from Nobleford who was talking to someone online in the United States and the person drove up to meet the girl but was stopped at the border — he was a 30-year-old male coming to meet the girl but told her he was 17 years old.
“This is how a lot of people get kidnapped, killed, raped — because they’re so trusting you would tell anybody anything on the Internet. It’s very dangerous,” Small said.
Small provided the students with a few examples of what would be illegal under the new C-13 legislation passed in March. One example was there’s a boyfriend and girlfriend, both 16 years of age, and the girlfriend sends an explicit picture to the boyfriend but the relationship concludes. The boyfriend then proceeds to take the photo and shows it to his friends. Now, because of this bill, it’s illegal, she said.
“You can be charged criminally and the punishment is up to five years of jail time. They’re taking this very seriously, the same as cyberbullying. You can now be criminally charged and go to jail for it,” said Small.
Information about Bill C-13, the RCMP officers said, will be passed along to teachers, parents and media outlets to help raise awareness about cybercrimes and cyberbullying.