Times they are a changing — but why should the family farm? Local farmers unite to protest Bill 6 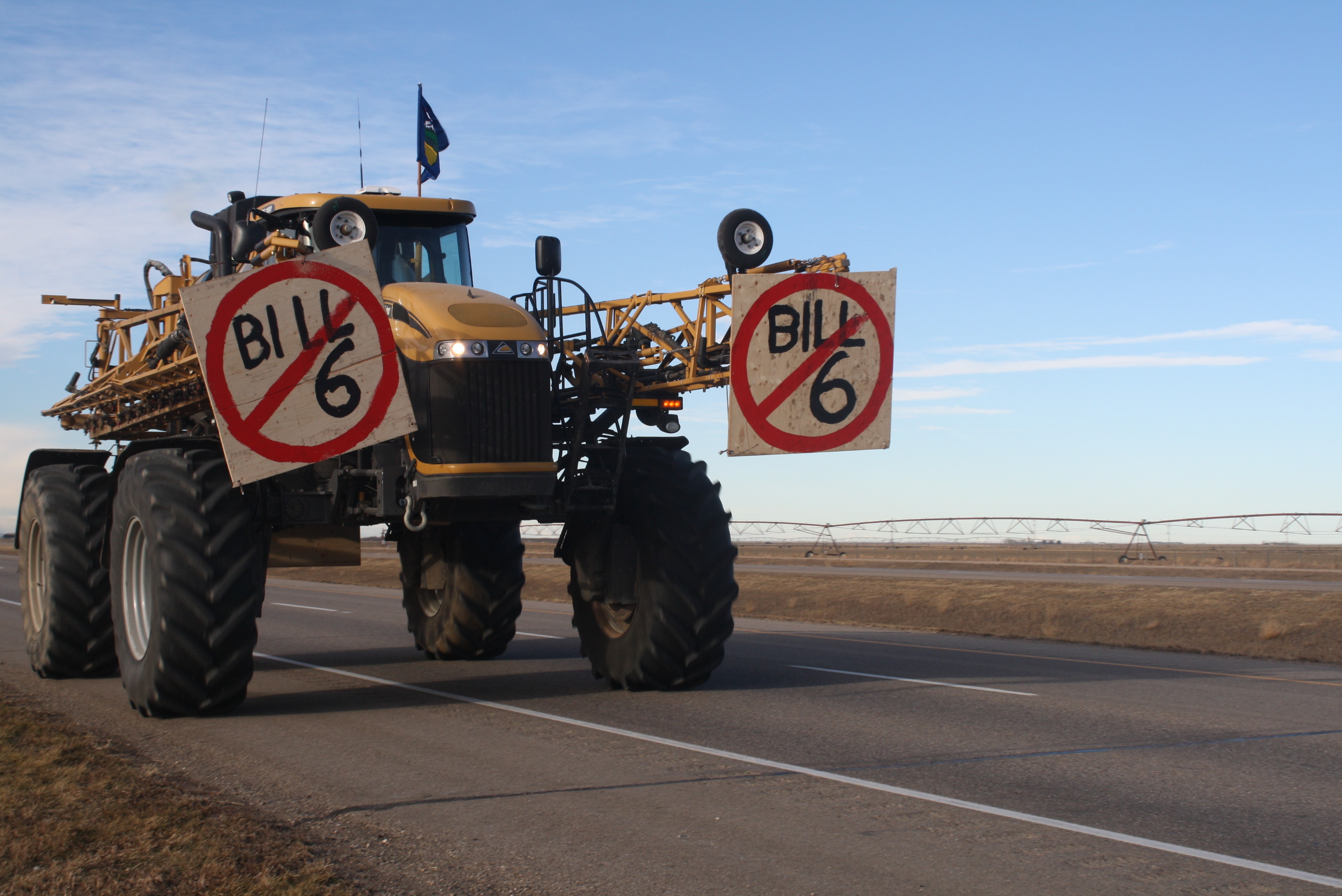 Do you remember Farm Aid in the U.S. during the 1980s with Willie Nelson at the helm? Thirty years ago and today — Farm Aid’s goal continues to support family farmers. In southern Alberta and across the province in 2015, farmers have united to stop Bill 6, which many family farmers and supporters believe will be detrimental to local farms. Bill 6 or the Enhanced Protection for Farm and Ranch Workers Act, in a nutshell and according to Alberta Jobs, Skills, Training and Labour — would be implemented to ensure the safety of wage-earning farm and ranch employees and preserve the family farm — but many local farmers say, “Bah, Humbug!”
On Dec. 7, farmers took to the highways once again, this time on Highway 3 north of Chin and the McCain Foods plant in protest of the provincial government’s Bill 6 plans. A convoy of farmers hit the road on their farm machinery and headed to Western Tractor in Taber to join forces to form a voice of dissent in regards to Bill 6, which has many facets to be explored — both good and bad, but consensus amongst many southern Alberta farmers conclude public consultation is key before Bill 6 becomes law.
Even though Herman Loedeman from LCR Construction and Renovations in Picture Butte isn’t a farmer, he wants to help out southern Alberta farmers. “Because the farmers are feeding me too. I figure it’s my duty to help,” he noted, as he was part of the group heading to Taber Dec. 7.
According to Loedeman, he builds a lot on farms and most of his projects are farm-related and agricultural-based.
Loedeman also believes Bill 6 should be stopped or put on hold.
“To me, I think most farmers have the best plan out there because it’s mainly Workers’ Compensation and unionizing. If the farmers have to put their crops in with unionized people, it’s never going to work because it’s very flexible hours. Sometimes, you have to work through the night,” he said.
For his own business, Loedeman explained, if he and his workers were finishing a floor and one of his employees was only going to work eight hours a day, then Loedeman would be stuck with an unfinished floor.
“If we have to start paying overtime, I think our cost is going to have to go up and nobody will build. That’s how I look at things,” he said.
But what about employee safety? What if employees have to work overtime without proper compensation? What if an employee feels as though a job is too dangerous or has to work in unsafe working conditions? And, other industries in Alberta have bought into Workers’ Compensation and occupational health and safety regulations.
“From what I gather, most farmers have — I almost dare to say — a better plan than WCB (Workers’ Compensation Board). Because WCB is only covered at work and most of the farmers have plans that they’re covered 24/7. Even if something happens at home, they’re still covered. To me, yes, they do need to look at safety — the safety is first. But, there’s different ways to go about it and it seems like they’re (the Alberta government) shoving Bill 6 down our throats without even knowing what they’re actually going to give us,” Loedeman said.
Instead of the NDP government implementing Bill 6 as is, many farmers believe the issue should be discussed with all parties the bill will affect.
“With WCB, I’m sure farmers are willing to do something like that but the way it’s going about it, it’s almost pushing through an empty box and we’ll fill it later after you said ‘yes.’ We can’t even say ‘yes’ because they’re just going to shove it through,” he added.
Unfortunately, Loedeman said, the government is going the wrong way about it.
“They should have an information evening and just talk to the farmers about what is best.”