Baby, it’s cold outside: But, it’s still about the birds 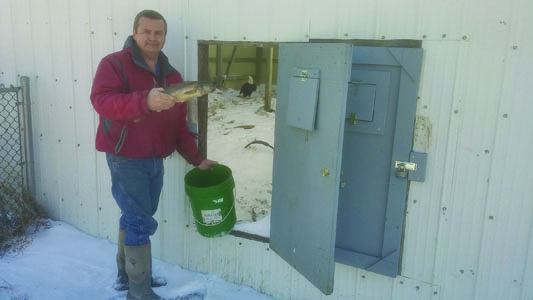 During the holidays, holiday revelers are familiar with the “‘Twas the Night Before Christmas” poem and the line, “not a creature was stirring, not even a mouse.” But, about 8,000 creatures have been stirring at the Alberta Birds of Prey Centre this winter in Coaldale, as the centre is home to an actual mouse house for feeding purposes plus staff and volunteers are on hand during the winter months to make sure the flying guests are taken care of.
In the winter months, Education Co-ordinator Marianne Durocher noted, the centre isn’t as glamourous as it is during the summer months but it’s still business as usual taking care of the centre’s winged visitors.
“It’s just a lot of bird maintenance and site maintenance. Feeding is number one and is the most important thing for us to do in the winter time, to keep the birds fat and healthy,” she said, as her trusty sidekick Mr. Nickerson, a barn owl, was perched beside her while she took care of centre business. Durocher has been with the centre since 2007.
A lot of cleaning up, is also part of winter maintenance, as the birds were moved inside prior to the colder temperatures.
“So, a lot of poop scooping we have to do, which is not necessarily very fun but has do be done,” she joked.
And, the centre raises money during the winter months and staff and volunteers visit the mouse house and take care of that portion of the facility, as well.
Durocher said she also works on indoor programming in the winter time.
“Working on curriculum-based programming for the elementary schools that come in the summer time. Just trying to make our programs a little bit more focused to what the kids are learning in each grade. Usually, we have Grades 1-6 that are coming in. So, what can we do to help them further their studies along?”
Between 100-150 birds are at the centre during the winter months, Durocher said.
“Colin (Weir) does let a lot of birds go in the fall and in the spring. We definitely don’t have as many now as we did in the summer time. We have upwards of 250 in the summer time. Most of them are inside right now,” she said.
Weir is the centre’s managing director and one of the founders of the summer tourist attraction.
According to Durocher, anywhere there’s a building, there’s a bird with aviaries set up for the many fine-feathered friends.
Over the winter, Durocher added, Weir takes the centre’s programs on the road to Banff and Lake Louise quite regularly and to sport shows in Calgary and Edmonton in February and March to raise awareness about birds native to Alberta and the centre.
“Just bringing up native species to the sport shows and just doing public education about the conservation work we do,” she said.
The centre, Durocher said, goes through two to three times more food in the winter than in the summer too.
“Even though we have fewer birds in the winter, they need more to keep them fatter and to keep them warmer throughout the winter months.”
A larger bird such as a golden eagle, outside in the winter, could easily eat a duck or a rabbit a week, Durocher explained.
During winter months, the birds don’t do a lot of flying because of the cold temperatures and the birds aren’t necessarily very motivated to fly either, according to Durocher.
“Sometimes we might fly them inside if we’re doing training because it’s warmer and just a little bit easier for us. A lot of the birds are retired for the winter time. They’re kind of like us at Christmas time — they put on the pounds and they kind of do a lot of sitting around and then come spring time they have to get back into sort of bikini shape again,” she joked.
Recently, the centre received $749,000 of provincial government funding through the Watershed Resiliency and Restoration Program.
“It’s highly appreciated and it’s something we’ve been working on for several years. The idea is, we’d like to sort of increase the wetland area just around the bird centre,” said Weir, before heading out to take care of bird feeding duties.
“We’re creating more wetland habitat and then also providing some really needed flood relief for some nearby owners. It’s a real win-win for the creatures here we care so much for and then maybe some of the surrounding landowners in other parts of Coaldale and in the county,” said Weir.
Weir said in the summer, it’s very glamourous and staff, volunteers and the birds are local celebrities but in the winter — staff and volunteers are still outside looking after the birds, even when it’s -30.
“A lot of the local farmers and cattle ranchers can identify with what we do because we’re outside all the time looking after the birds. It looks good for them when they’re riding across the prairies on their horse in the summer but in the winter time, not so much,” he added.
Over the winter months, the centre has two full-time staff, one part-time employee and a few volunteers.
Donations, Weir noted, are always highly appreciated, especially in the dead of winter in southern Alberta.
“We don’t get any government subsidies to run this place. It’s just totally donor sponsored. For any donations we get during the month of December, the Scotiabank in Coaldale, is actually matching the first $5,000 that come in. We’ll get another $5,000 if we get local people donating $5,000 to us,” Weir noted.
Donations can be made through the centre’s website or by mailing in a donation and tax receipts can be issued.