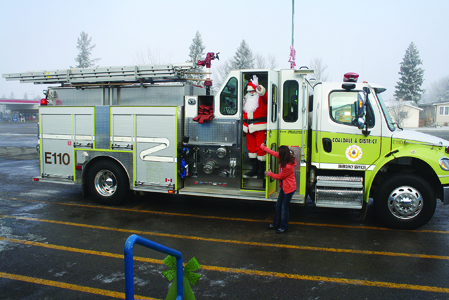 Kids of all ages — you better watch out, you better not cry, you better not pout because we’re about to tell you why — Santa Claus is coming to town, as NORAD Tracks Santa celebrates 60 years Christmas Eve.
In 1955, the legend goes, a U.S. ad in a newspaper directed kids to call Santa but the number was misprinted and kids reached a crew commander on duty at, what was then, the Continental Air Defense Command Operations Center.
A tradition was born and NORAD (The North American Aerospace Defense Command) has carried on the magic and has tracked Santa’s Yuletide journey since 1958.
This year, for the first time, the website also features the NORAD Headquarters in the North Pole Village with highlights of the program over the past 60 years, which includes stock footage from back in the day until now.
Preparations for the big event have been going on for quite some time now, said Lt(N). Marco Chouinard from the NORAD Tracks Santa Team.
Last week, Chouinard said prep work was done on the NORAD Tracks Santa operations centre, to be used Dec. 24.
“The phones are going in, the computers, the screens and all that. All the preparations. As well, Santa is getting all prepared at the North Pole and he’s already received some weather briefings on the Canadian and American side,” he noted, which is great news for kids.
Chouinard, a Canadian, was on the phone from Colorado Springs, CO.
Planning for such a large operation, Chouinard explained, starts in the summer with revising documents from the year before and prep work on various aspects of the operation.
“Really, in November, that’s when it all starts in a big way.”
On Dec. 1, the NORAD Tracks Santa website was launched at http://www.noradsanta.org.
The site features Santa’s North Pole Village with a holiday countdown, games, activities and more and the website is available in eight languages.
Official apps are also available in Windows, Apple and Google Play platforms, so kids and parents can count the days until Santa’s launch on their Smartphones, tablets and/or laptops.
Families can also track Santa through social media platforms such as Facebook, Twitter, YouTube and Google+. Santa followers just need to type “@noradsanta” into each search engine to get started.
According to NORAD Tracks Santa, starting at 12:01 a.m. MST on Dec. 24, website visitors can watch Santa make preparations for his flight.
NORAD’s “Santa Cams” will stream videos on the website, as Santa makes his way over various locations. Then, at 4 a.m. MST, trackers worldwide can speak with a live phone operator to find out about Santa’s whereabouts by dialing the toll-free number 1-877-Hi-NORAD (1-877-446-6723) or by sending an e-mail to noradtrackssanta@outlook.com. Any time on Dec. 24, Windows Phone users can ask Cortana for Santa’s location, and OnStar subscribers can press the OnStar button in their vehicles to locate Santa.
Chouinard added children or those young at heart can explore the various online aspects of NORAD Tracks Santa for family fun and for finding out about Christmas traditions around the world.
This year, Chouinard said, there will be about 1,500 volunteers due to the generosity of numerous government and non-government contributors and the hard work of Canadian and American uniformed personnel, Department of Defense civilians and their families.
“We’re so happy this is the 60th year we are able to track Santa and we’re his official tracker. We’ve kind of become a part of a family’s Christmas tradition,” he said.
Each year, Chouinard said, NORAD Tracks Santa is getting bigger and better.
“With the Internet and then when Facebook came out — it’s amazing now, the people we can reach because we have Facebook, we have Skype, we have a website and people on Dec. 24 can push on their OnStar button and ask where Santa is. As well, there’s apps on Windows and the Apple phones to track Santa. There’s a countdown going on right now to Dec. 24,” he added.
Last year on Dec. 24, according to Chouinard, NORAD Tracks Santa received over 134,000 calls and over 6,500 e-mails.
“On the NORAD Tracks Santa website, just for December last year, we had 21.8 million visits and the visits were from people from 234 countries and territories. It’s quite some big numbers.”
Chouinard said one of the most important things kids ask NORAD Tracks Santa is — When will Santa be visiting my home? Remember, Santa knows if you are sleeping and he knows when you’re awake.
“Only Santa knows his route but usually he shows up between 9 p.m. and midnight but if the kids are not in bed, he just flies by and then he has to come back once they’re in bed,” said Chouinard.