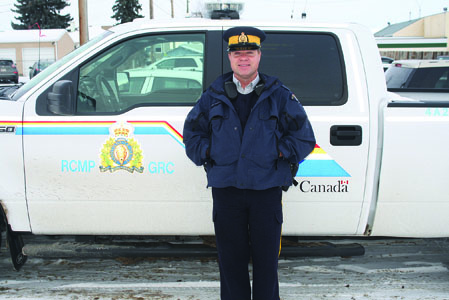 Coaldale schools have a new RCMP School Resource Officer (SRO). His name is Cst. Doug Sokoloski and he’s all geared up and ready to take over the role, which he is quite familiar with. The RCMP took over policing duties from the Lethbridge Regional Police Service (LRPS) Jan. 1, 2016.
Previously, the new SRO was stationed in Pincher Creek for seven and a half years and a part of his duties in the community was working within the M.D.
“I was a community policing officer. Part of that was school resource officer and traffic and public relations were the other few main components. I have done that, of course, at the normal detachment level when I was in Raymond/Magrath — schools were part of our mandate and in Fort McMurray, as well,” he explained.
Sokoloski has been a member of the RCMP for the past 19 and a half years — pretty close to two decades, with a plethora of experience.
“Prior to that I was fish and wildlife in Saskatchewan. Another component of that is strong public relations,” he noted.
In this position, Sokoloski added, the purpose is to be visible in the schools and around the schools.
“Normally in the morning, I will be out and show my presence in the school zones at all the schools. And presentations during the mornings and afternoons and then obviously, at pick up time, I will show a presence at the schools, as well. Public relations will be a part of it but there will also be some education sessions. At the elementary level it will be what we do in the RCMP and what we do as officers. Eventually, I’d like to bring in some of our specialty units that are around — the forensic ident guys and the CIS guys can come in. The dog, at the elementary level is a big draw. Kids love the dogs,” he said.
As grades graduate into middle school and high school, Sokoloski said, there will be a different focus with each age group.
“Driving, drug prevention programs, theft of identification, Internet security — those are all things we will hit on and will work with the schools,” he said. “It’s great. I’ve got two kids in school in Coaldale in Grades 1 and 3.”
And, Sokolski said, he has a vested interest and he plans on living and retiring in Coaldale. “I’m here for the long haul.”
D.A.R.E. or Drug Abuse Resistance Education, Sokoloski noted, is a 12-week program RCMP officers are trained to do and the program can be rolled out in communities if there is a need. “I am D.A.R.E. trained and I’ve done multiple D.A.R.E. courses in the past. If that is something the schools want to do — that would be focused at a Grade 5 level,” he said, adding the program has been revamped over the past few years to focus more on what a student can do to be a better person in society, as well as the drugs and alcohol component. The program can also be targeted to a few other age groups.
According to the SRO, D.A.R.E. is a very good program and if the schools want it — it is certainly something the RCMP can provide.
Sokoloski believes the RCMP is a good fit in Coaldale. “The RCMP is looking really forward to integrating in the community. We make it a lifestyle and of course living and working here is something we like to blend together. It’s a great town. I’ve been here a couple of years on and off now and the kids are in school. It’s a place I want to live in and a place I want my kids to live in,” he said.