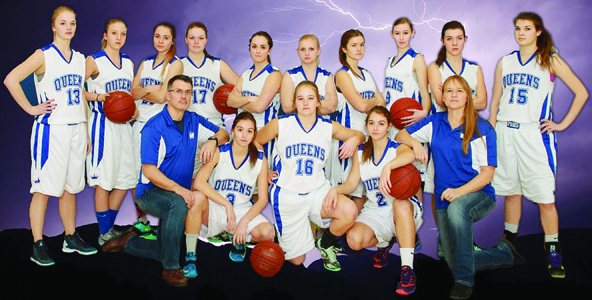 From Mar. 17 and through the weekend Picture Butte High School (PBHS) will be hosting 2A Girls Basketball Provincials with the Queens being the home team.
“It’s going to be a pretty big deal. We’ve got a lot of great support for it. This is the third time, since I’ve been here, we’ve hosted. So, three times in the past 10 years for sure,” said Aaron Skretting, vice-principal of PBHS.
“But, the first time we’ve hosted girls. It’s been boys the last couple of times,” he added.
Skretting noted the school is trying to match the bar it set last time when the school hosted provincials. “Maybe go beyond that, hopefully.”
Video streaming of the action, an opening ceremony and a banquet are also in the works for the highly anticipated event, which will see teams visit from all across the different zones in Alberta, including local teams.
This season, Skretting said, the team has some solid veterans and some promising youth.
“We’ve got a good balance of Grade 10s, 11s and 12s and everybody’s kind of contributing. I think they’re growing and they’ve got some potential. Hopefully, by the time provincials come around, they’ll be ready to go and they’ll have a good showing at provincials,” he said.
Coach Gord Bramfield said provincials are an exciting time for the community, for the kids and for the parents and for the school.
“It’s an event that requires a lot of support and collaboration. I couldn’t feel more proud to be a part of that. I think the community is all jumping together to make sure it’s going to be an incredible experience. I know the staff are motivated and they’re excited.”
Basketball is a huge part of the culture at PBHS and the community too, according to the coach.
He added prep work for setting up provincials is extensive.
“Everybody’s got a role and everybody’s got a job to do and we all have to be on the same page, so it runs smoothly,” Bramfield said.
As for the team, Bramfield said, the team is a broad mix of girls and they are hard working and want to compete.
“They want to win. They work really well together. They’re friends, both on and off the court. It’s a work in progress — there’s still a lot of stuff we’ve got to iron out in terms of how can we be the best competitive team out there. But that’s what sportsmanship is about. That’s what building a team is about. It’s about getting better every game, it’s about getting better every practice,” he said.
But, Bramfield said, it’s also about learning how to come together, as a cohesive group.
“The one thing I can say is they all share the same vision. They all want to do well and they want to represent themselves, their school, their parents and their community. They all have a passion for basketball,” he added.