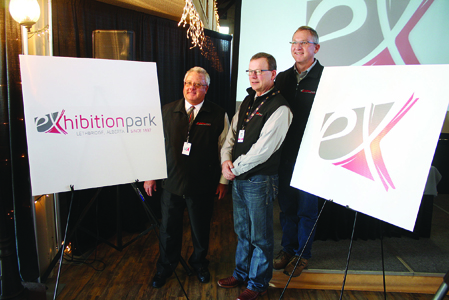 Exhibition Park in Lethbridge revealed the organization’s new brand last week at a media launch, as EX Chief Executive Officer (CEO) Rudy Friesen made the announcement. “It’s been an interesting process,” he noted. “We’ve been in this community since 1897. With that comes a lot of history, a lot of tradition and a lot of habits. One of our former employees described it this way, ‘in our organization there are an awful lot of cow trails.’ Cow trails serve a very important purpose — they lead cattle to water, to shelter and to feeding grounds. As I grew up, I noticed at one point in my life, they are never, ever straight. You stand there and you say to your father, why don’t they just go that way to the water, why do they go that way? Cows are creatures of habit, they go the same way as the herd before them, they follow the same path. In our organization, we came to the determination, we had a lot of cow trails. We weren’t doing good things badly or poorly but we weren’t seeing more effective ways to do things. It brought on a conversation about change,” he explained.
Even though Exhibition Park has been around the community since 1897, Friesen added, the community is not the same as it was in 1897. “Why do we have to try and be the same?”
“We embraced the concept of change. One of the things that was a very significant change is this brand. You just don’t change your image in the community and do it lightly. The organization took it very seriously,” he said, adding it took about 19 months to change Exhibition Park’s image and brand.
“There’s been a lot of heavy digging. There’s been a lot of challenges. There’s been a little bit of anger. And it all resulted in what we have before us today,” he said.
The new brand and image isn’t the only thing that is going to change, Friesen said. “Many things that are habits within the organization are now going to change. We’re very excited about the prospects.”
President of the new board of directors of The Lethbridge and District Exhibition Andy Cumming, took a moment to discuss the organization’s move forward in 2016, and announced this year’s board of directors.
“It’s an honour for me to be president through this change. We have a wonderful and very talented board of directors, who all volunteer and put in their time to make this organization great and are forward thinking, looking into the future and looking for better things for Exhibition Park, as we move into our 119th year this year,” Cumming said.
A general meeting was held Feb. 4 to elect the 2016 board of directors. Incumbents Bev Lanz, Cathy Maxwell and Bob Simonton were re-elected for a second three-year term. Newly elected directors Ken Benson (a Lethbridge County councillor) will serve three years and Bruce Galts will serve for a one-year term.
The 2016 board is as follows: Andy Cumming (President), Mike Davis (First Vice-President), Herman Elfring, Rick Neudorf, Tom McKenzie, Stuart Cullum, Mark Sayers, and past president Don Young. Plus the aforementioned. Lethbridge city Coun. Joe Mauro continues as a representative for the City of Lethbridge and Reeve Lorne Hickey represents Lethbridge County.
Cumming added Exhibition Park is just under 1,400 event days a year. “We’re right around four events per day, on average. Every single day of the year. That’s something we’re incredibly proud of. It also shows the need for facilities we have here. We’re actively pursuing redevelopment of our facilities,” said Cumming.
The following are 2016 event dates at Exhibition Park.
Ag Expo and North American Seed Fair (Feb. 24-26), Home and Garden Show (Mar. 16-19), Children’s Festival (Apr. 16), UFA Aggie Days (Apr. 26-27), Hot August Weekend (Aug. 13), Whoop Up Days (Aug. 23-27), Big Xmas Trade and Farmers’ Market Show (Dec. 2-3). Farmers’ Markets at Exhibition Park Saturdays May 14-Oct. 29 from 8 a.m. to 1 p.m. Downtown Wednesdays July 6-Aug. 24 and Sept. 7 from 10 a.m. to 3 p.m. (no downtown market Aug. 31). Westside at the University of Lethbridge (new location) Thursdays July 7-Sept. 1 from 3-6 p.m.