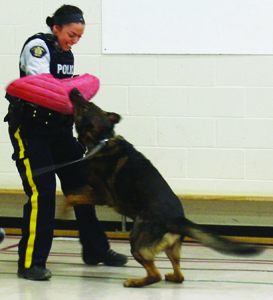 Students seem to love visits from animals at schools. Recently, RCMP Coaldale detachment officer Cpl. Jesse Gawne and his police dog E.J. from the RCMP’s police dog service paid a visit to Coaldale Christian School, as well as other local schools in the community.
Gawne noted he’s been with the RCMP for 13 years and with the dog section for close to eight years.
“Our dog section is split up in two categories. We have general duty dogs, which is what E.J. is,” he told students, adding the other category of dog deals with drug searches and explosives searching.
Before Gawne introduced E.J. to eager students, he went over a few ground rules which included E.J. uses his mouth to grab people, so he didn’t want any of the students making any sudden movements.
An officer from the Cardston detachment joined Gawne and E.J. for the visit. The visiting officer is a quarry, which is someone learning to work with a dog and its handler.
According to Gawne, when he started with the dog unit, he was posted in Westlock, Alta. but was also posted in Kamloops, B.C. and his dog then was an explosives profile dog.
“We got to do things like search buildings for the prime minister and we also attended the 2010 Olympics, which was quite an experience. We got to stay in Whistler,” he noted.
Building confidence and self-esteem is what is important when training a police service dog, much like how teachers teach students and using a reward system with positive reinforcements.
E.J., Gawne explained, does tracking, which includes good boys and girls and bad ones. Gawne also added his last dog found a four-year-old that wandered off during a family reunion.
“What dogs can do, is incredible.”
The dogs also go into areas officers can’t or if it’s not safe for officers to do so. What a police dog does for police officers is incredible, Gawne noted.
Gawne showed students equipment used in the training of police dogs, which included a bite arm, and a ball (which is one of the dog’s favourite things) and a drug collar and tracking harness. Part of the demonstration also included E.J. looking for hidden narcotics to show students the dog in action and the bite arm in use.