Canadian contributions in space out of this world 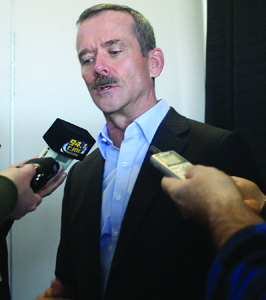 Canada, according to retired Colonel/astronaut Chris Hadfield, was the third nation on Earth in space.
“After the Soviet Union and after the United States, we were third. It was with a scientific research satellite called Alouette and it taught us about the ionosphere and about the northern lights. We have maintained that kind of niche but world class capability ever since, right through to today,” said Hadfield, during a media scrum last week in southern Alberta at the Greatness In Leadership conference, including work on the James Webb Space Telescope, construction of the 30-metre telescope going on, and two Canadian astronauts participating in the International Space Station.
Hadfield noted if he was to predict the future, the best way to do that, is to look at what the Canadian aerospace sector has done in the last 50 years.
“I think we’ll continue to do that. A lot of the work is done, of course, co-operatively with other countries because we don’t launch our own spaceships,” he said, and it is the only way to get things done.
According to the space and pop culture Canadian icon, it was inconceivable to think a Canadian would command a spaceship in 1980, when Hadfield was already in university — but through international co-operation, various corporations working together and a combination of private and federal funding — Marc Garneau flew in 1984.
“And then a bunch of us have flown since, right through to where we are today. It’s always difficult and there’s always more demands then there is funds. That’s just normal but at the same time, magnificent things get done and there’s Canadian hardware orbiting the world right now and it’s used just about every week on the space station and there’s Canadian hardware on Mars, and there’s Canadian hardware orbiting Jupiter and Saturn. None of it is easy, we’re not doing it because it’s easy, but we’re doing it because we just barely can,” Hadfield explained.
Every Canadian, Hadfield said, should look on the back of the $5 bill and be proud of the accomplishments we can do. “Don’t get too wrapped up in the continuous process that is always difficult.”
Hadfield said he was 25 years in the military and he intercepted Soviet bombers off the coast of Canada, as part of that job and he’s had an entire 35-year career of service with Canada, most of it outside of the country.
“When you challenge yourself to do something extremely high stakes, like with an armed F-18 intercepting an armed Russian bomber off the coast or flying a spaceship, commanding a spaceship and doing a space walk — to challenge yourself to do something extremely technically complex but also has huge repercussions if you don’t do it right — that takes a really complex set of skills and develop methods of dealing with things. But by pushing yourself to that level you come up with ideas applicable right across the board,” said Hadfield.
How do you conduct yourself personally? How do you turn yourself from a nine-year-old dreamer into somebody that commands a spaceship? How do you go through that process? Hadfield said there is no road.
“There is no way when I’m nine and yet it happens. How do you prepare an international team to operate a spaceship? How do you do those things — on a personal and professional level? The lessons that come back from it are really useful to a lot of people and that’s what I’ve spoken to schools and businesses for 25 years about, while I was active duty and now I’m retired. I think a lot of people take ideas away from it they can then apply to their own lives,” he noted, in regards to what audiences can expect from one of his motivational presentations, adding the applications are what really matter.
Hadfield said, growing up, he loved science fiction and read Edgar Rice Burroughs and Arthur C. Clarke and then “Star Trek” aired on TV. “Which was like, wow, a western in space. It’s like allowing yourself to think things otherwise you didn’t think you could think. Then ‘2001: A Space Odyssey’ came out, which I still don’t understand, but it was permission to dream,” he joked.
But, Hadfield continued, the beauty of that was it wasn’t just dreams.
“People were actually leaving Earth at the same time. I was nine when Buzz Aldrin and Neil Armstrong walked on the moon. For me, that cemented the whole deal. Something that had been impossible became possible on July 20, 1969. It is a wonderful thing, as a nine-year-old kid, if you can realize impossible things happen. And they happen, not because you won the lottery, but because of a huge amount of work and someone having a vision and pursuing it right until they made it happen,” he said.
For Hadfield — July 20, 1969 — was the day he decided he was going to be an astronaut and now, how can his contributions influence young people and their choices in life. “Are they going to go to university, are they going to improve who they are, are they going to try something new, are they going to start a business or are they going to whatever? I can hopefully be an influence in that process now, based on the things I’ve chosen do do, just like Buzz and Neil were for me. If you can get everybody to feel an imperative to bring themselves to the limit of their own personal potential, we are a much more productive society as a result and I want to be a part of that,” Hadfield said.
Check out a related story next week with space legend Buzz Aldrin. Aldrin, along with Armstrong, made the historic Apollo 11 moon walk in 1969. Aldrin was also a guest speaker at this year’s Greatness In Leadership Conference, held last week in southern Alberta.