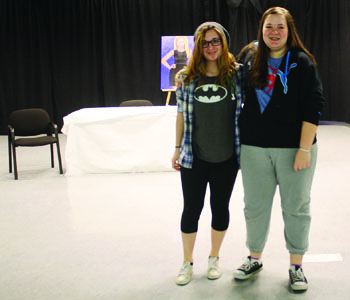 Picture Butte High School’s Fine Arts production of “A Lighter Shade of Noir” last week was a long time coming.
Mark Ogle was the production’s director but he was also a performer and helped out with lighting and sound. Ogle teaches Foods, Language Arts and a little bit of literacy plus Art 9.
“I’ve kind of incorporated drama into that. I would love to do more drama but we just don’t have the knack for it right now,” Ogle explained last Tuesday afternoon, prior to the evening performances.
Ogle noted students and staff worked very hard on the show, which followed the trail of a mysterious gumshoe detective and he was invited to the International Detective Gala and the gala hosts a plethora of other sleuths with a play on words for the names of the guests.
“Instead of Dick Tracy it’s Tracy Dick or instead of Sherlock Holmes, it’s Shirley Holmes — so it plays on that,” said Ogle.
It was a classic who done it with the detectives banding together to solve the ultimate of crime. The show had 27 cast members with four PBHS staff. The cast also included five students from Dorothy Dalgliesh School and two students from Huntsville School in Iron Springs.
“We kind of really just branched out and had other schools come in, which has been awesome,” he added.
This school year marks Ogle’s first foray in the high school drama department, so to speak, and at the school but it isn’t the first time Ogle has hit the stage.
“I’m a University of Lethbridge grad. I did shows there,” he noted.
Ogle said preparations for the show began in December with auditions at the middle of January and rehearsals started at the beginning of February.
It was a little tough, Ogle admitted, getting students out to perform on stage but overall students became really receptive of the production.
Backstage, the show had two prop girls from Grade 7 and there was a full band, which played an underscore for the performance and a Grade 10 stage manager.
As for cast members, the hotel owner role was played by Sarah Peters.
“It’s been long and tiring but I’m really excited,” said Peters, last Tuesday afternoon, prior to the week’s evening performances.
Mykala Penrod played the role of law enforcement in the show and the Grade 10 student agreed with Peters the process leading up to last week’s performances was long and tiring but worth the trip for the inaugural drama run. “This is our first time,” Penrod added.
Grade 9 student Cayley Secrist was also excited about the opportunity to be in the show. “I play Shirley Holmes. It’s been really fun.”