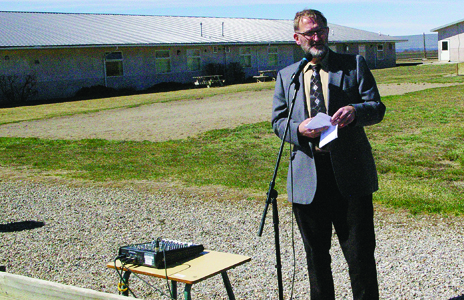 According to one educational professional in Lethbridge County, misinformation has been running rampant in the media and on social media platforms in regards to independent school options, as other educational professionals, parents and community members share his discontent.
Principal at Providence Christian School in Monarch Hugo VanderHoek noted a recent motion by PC leader Ric McIver asked the Alberta government to affirm its commitment to allowing parents to decide on educational delivery for their kids including home, charter, private, francophone, separate or public education programs. “Unfortunately, the stories in the media have largely portrayed unfounded, illogical, and inaccurate criticisms regarding choice in education,” said the principal.
VanderHoek noted research clearly indicates independent schools serve a broad section of society and they serve students from various cultural and economic backgrounds, from different faith communities, and with a variety of learning needs. ”Independent schools provide safe and caring learning environments, which allow for significant parental involvement, and produce graduates who are active and positive citizens,” he added.
Even with conservative estimates that don’t include expensive factors such as capital costs, VanderHoek explained independent schools have saved Alberta tax payers and the public purse some $750 million over the last five years.
“The situation over the last decades in Alberta has been such of course parents have choices for education — public schools or independent schools or charter schools,” he said, adding often during times of funding information being sent out to the media masses, information gets published in the press and elsewhere that are not always accurate.
There’s a group of the population, he noted, that says we should just can all independent schools because public schools are better and they serve the public better. “In actual fact, the evidence does not support that.”
It’s always a bit irksome, he added, as independent school staff work hard in the education field, just like other school staff do in other divisions and across the province.
Does the independent schooling option serve just those parents or is independent schooling a benefit to all of the province?
The evidence, the principal added, is it serves the public good. “All of the important measures the ministry uses, the independent school students at the end of the day — most will score just as well or better than public school students,” he said.
With the recent provincial budget being released earlier this month, parents that send students to independent schools actually save the government a lot of money, VanderHoek said.
VanderHoek said he saw a recent statistic and it noted independent schooling saved the provincial government close to $750 million over five years and another stat noted about $1 billion is saved over five years, including money saved by parents who home school and not in the system. “I think that’s an interesting number. If you look at the budget numbers that came out, the deficits, if you think of the $10 billion plus and you think if we were to can independent and home school all together you can add one billion to that number,” he said, adding why would the government oppose it?
It has been a struggle, VanderHoek added, because Providence and other independent schools like it, are small minority groups and many of the parents with kids in independent schools or being home schooled are not activists or are voicing concerns over this or that cause.
“They feel this a good choice for them and for the majority of them, these are not high income earners. It is a bit of a sacrifice out of their own budgets but they feel this is the right choice for their children,” he said.
VanderHoek also believes it is important to express appreciation to the current NDP government in Alberta for the support of the minister of education.
“He’s been very clear stating the current situation, for as much as he can see, is a good situation and he has no plan of changing it. The statements we hear from the government — they are committed to parents’ choice. It’s a very important thing,” VanderHoek added.
“They certainly have to be commended for that because they do experience pressure from other organizations and school systems to change that and they’ve resisted that and we think it’s very wise and commendable.”