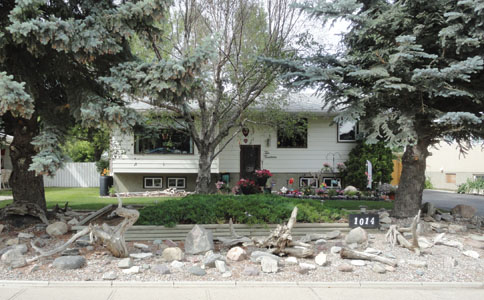 Communities In Bloom in Coaldale is expected to be bigger and better than ever this season. “We have so many things going,” said Doreen Lloyd, Coaldale Communities In Bloom chair. This year, Lloyd noted, is the 14th year Communities In Bloom has been a local seasonal delight in Coaldale for residents and visitors. “Next year, we actually want to celebrate Canada’s 150th birthday and our 15th anniversary. We’re looking to win in the provincials,” she added.
Right now, the local group is selling tulips for $6 a dozen. “Canada developed a new tulip for their 150th birthday. It’s a white tulip with a maple leaf on the side. It’s absolutely gorgeous. We’re hoping to really splash the whole town in red and white next year,” Lloyd said, adding if residents want to by tulips just give her a call at 403-315-3636.
With the Yard of the Week, residents and businesses can nominate others or be nominated too. “If you have any neighbours or yourself — you want to just give us a call and let us know,” she said. Surveys have been sent out to businesses to let the organization know what they’ve been up to volunteer-wise in the town and what businesses are doing in support of the environment.
Lloyd said a garden tour is also planned for July 16, which is a always a local favourite. “If you have a yard or a neighbour’s yard that would qualify for a garden tour, that would be great,” said Lloyd. So, Lloyd noted, get your yards in shape Coaldale. “The judges are coming July 21. We want the town to look really good for that day,” she said. Coaldale won the Communities In Bloom provincial competition in 2006 and 2011.