County faces lawsuit due to tax 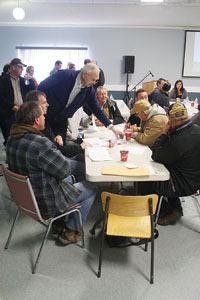 A group of feedlot operators and supporters from the Lethbridge County area are using the courts to try and get a judge to make a ruling the new county Funding Our Future tax bylaws are invalid through a recent lawsuit.
“It was delivered to the courts June 18,” said Rick Paskal, from Van Raay Paskal Farms near Picture Butte. Paskal is one of the litigants in the law suit.
It was announced earlier this year, new county taxes were on the way for livestock operations, after Lethbridge County passed second and third reading of three bylaws at a regular meeting held Apr. 21.
The Business Tax Bylaw, Special Tax Bylaw and Community Aggregate Payment Levy became a reality, after tedious deliberations and public consultation.
As for the Business Tax Bylaw, the 2016 county budget includes $1.6 million for road construction, $1.4 million for bridge replacement/repair and $500,000 for hardtop surfaces, which will be placed in a capital reserve for a future hardtop project.
According to a report submitted to county council for consideration, the phased in approach to Funding Our Future, which includes the business tax bylaw, special tax bylaw and community aggregate levy bylaw will result in a total of $850,000 less in revenue in 2016, as the county moves forward to fund maintenance and reconstruction of the county’s Market Access Network, which includes 2,000 kilometres of roads and 167 bridges. The county, according to a report, needs to collect over $3 million annually to invest in this network starting in 2016.
Funding Option 4 is based on a two-year phase-in approach of Option 1 with 75 per cent of revenue from the business tax and special tax in 2016 and increased to 100 per cent in 2017. Option 1, the report stated, reflects calculations based on the economic impact method resulting in $925,740 or 26 per cent of revenue generated from special tax and $2,474,260 or 71 per cent from the intensive livestock industry through a business tax. The report stated the 2016 tax rate in Option 4 is $3 per animal unit and a 2016 revenue of $1,855,695.
What the group of litigants and supporters are concerned about, Paskal noted, is the county elevating the tax level to an area where feedlot operators will be in a very uncompetitive position with other jurisdictions.
There’s two sides of the equation, Paskal explained — there’s a revenue side.
“The county is requesting more dollars for revenue, and we’re rather supportive of the county on lobbying the provincial government and the federal government for proper allocation of fuel taxes. We’re already paying a bunch of tax. A 25,000-head feedlot pays about $125,000 a year in fuel tax plus our regular property assessment that everybody gets assessed in the county,” Paskal said.
According to Paskal, by the county enacting this law, they allegedly have the power on their own to increase tax to whoever, whenever to balance their budget.
“They already published the tax is going to be higher next year and they wish they would have started it at $7 a head. They have a mandate to balance their budget by revenue only,” Paskal said.
What the group’s issue was right from day one — Paskal noted, is what about expenditures? What about the county’s handling of ratepayers’ dollars?
Before the group launched the lawsuit, Paskal added, it could see the county’s spending is, in the group’s opinion, totally out of control.
“The money they are wasting here today, they’ve told county residents the roads are in bad condition. The roads are not in bad condition, they’re taking perfectly good roads rebuilt seven years ago and spending $100,000 a mile to redo these roads again. It’s just a total waste of taxpayers’ dollars,” he said.
Council does not run the county, he noted — management runs the county, in Paskal’s opinion. “That’s a real problem here,” he added.
Lethbridge County councillors and staff have been advised not to speak about matters currently before the courts, it was reported.