RCMP to increase visibility in the Coaldale community 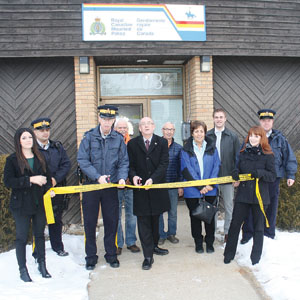 By J.W. Schnarr
For the Sunny South News

Coaldale RCMP is looking to increase their visibility in the community as both a way to connect with local residents, as well as a way to deter bad guys.
Sgt. Glenn Henry of the Coaldale RCMP discussed annual priorities with council during their regular meeting on June 27.
Henry said because of the timing involved with the transfer of policing power, the annual discussion on police priorities was late this year.
“In the RCMP world, we go Apr. 1 to Mar. 31,” he said. “But I needed something in place for this fiscal year.”
Henry outlined three main areas of focus for the RCMP in Coaldale.
These included a goal to build and maintain positive relations in the community — not just in Coaldale, but in the area at large, where RCMP is active.
Henry said he would be tracking events attended by RCMP for the purposes of community building and public relations including parades, Remembrance Day, and other community events.
“The purpose is to really see the police in a non-confrontational mode, but more as part of the community,” he said.
“The basis of community policing is we want people to be able to approach us, and come up and talk to us. If you see three or four police vehicles at one of the schools, I hope you’re thinking we’re playing floor hockey, because that’s what we’re doing.”
“I don’t want people to automatically think we’re going to an active shooter situation or something. I want people to recognize police aren’t there for emergencies necessarily. They’re also there to be part of the community.”
Another area of focus is on an annual crime reduction program. This can feature either focusing on known and ongoing criminal elements in the community or focusing on targeting specific crimes.
Henry said while there were few statistics to work with, the RCMP has identified car prowling as a community issue.
“We’re going to track and try to put in some strategies to reduce the number of thefts from vehicles,” he said.
“That might include nightly patrols and trying to educate people when we find vehicles unlocked. We might do newspaper ads — whatever it takes to reduce the amount of thefts from vehicles.”
The third area of focus is to reduce property crime through higher police visibility — especially at night, when many crimes such as car prowling occur.
Henry identified strategies such as traffic enforcement and “street checks,” a controversial practice also known as “carding” that has been prohibited in Ontario.
Henry described the practice as “…challenging people that are in our community who may not lawfully be here.”
“If it’s 4 a.m. in Cottonwood, and somebody’s driving around, let’s have a stop and see where we’re at,” he said.
“We might develop intelligence as to someone who doesn’t belong in Coaldale passing through for whatever reason. It’s good to track those people because we may catch them again in a different part of town, and maybe link some thefts to these people.”
Traffic enforcement is also a useful tool for visibility, according to Henry, and it can also be a way to gather intelligence and send a message to would-be criminals.
“It tells the bad people coming into our community if you come to Coaldale, you might be stopped by the police, and bad things may happen to you.”
During discussion, Coun. Jack Van Rijn asked how the department is managing with 24-hour coverage. Henry replied he did not want to discuss operational strategies in an open forum, but said the local RCMP is “doing well.”
“I don’t want to advertise to the community who we have working or how many we have working, that type of thing.”
“I live here,” he added. “I feel comfortable.”