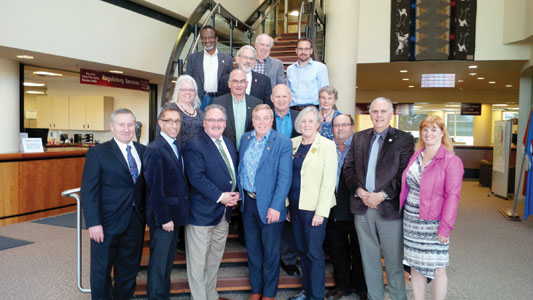 Back in June, it was announced, the Alberta government was investing nearly $10,000 on an updated cost-benefit study related to twinning Highway 3, which runs from the British Columbia border to Medicine Hat. Alberta Transportation stated in a media release, it will provide funding to the Highway 3 Twinning Development Association to update a 2002 Van Horne Institute study. The Van Horne Institute is through the University of Calgary, it was reported.
According to the media release, the previous study examined the estimated cost of the twinning project and the economic benefits to the southeastern region if Highway 3 were twinned from the B.C. border to the Hat.
Currently, there is approximately 115 of the 325 kilometres of Highway 3 twinned between Fort Macleod and Taber, the media release stated. The recent investment announcement will go towards updating the data in the previous study to reflect today’s costs and economic benefits.
“As an association, we’re really delighted to receive this funding. It will really help move this project forward. The studies are a critical and important part of the whole focus on twinning. Both for the association and for member municipalities and also for the Government of Alberta to understand the studies are focused on the cost-benefit analysis of twinning,” said association President Bill Chapman, who is also a Town of Coaldale councillor.
After the study is completed, Chapman said, the association would ultimately like to present it to Alberta Transportation for consideration.
“We would obviously like the government to accept that study as a vital reality twinning is important,” Chapman said, adding the Van Horne Institute would like to conduct the study once again.
Chapman said the association would like to see the study started right away and completed before the fall. “And/or whenever Van Horne is able to complete it.”
According to Chapman, the Van Horne study will offer an academic view of the cost-benefit analysis and the study’s findings will be used to update the study completed in 2002.
Obviously, the appetite for twinning wasn’t really as critical in the years past, Chapman said.
“We’ve seen the approach the provincial government has taken with either studies and other twinning projects including Highway 63, which in recent years has been a real focus of the previous government and this current government and the needs part of that reality up in Fort McMurray. Those kinds of projects take priority,” Chapman said.
Chapman noted the association was disappointed Highway 3 or any part of it were not included in the budget for this current government and the 2016 Budget did not include any part of Highway 3.
“The City of Medicine Hat and the City of Lethbridge have all contributed towards the membership of Highway 3, including all the municipalities along Highway 3 both urban and rural municipalities including municipal districts and counties have shown their participation through membership. They all recognize there is a cost-benefit to twinning Highway 3, not just for safety reasons but for economic reasons and for tourism, recreation, for transport of goods and services and agricultural needs along Highway 3,” he explained.
He added southern Albertans travelling through the area have had a chance to see firsthand the economic development along Highway 3 as it grows, expands and increases.
Chapman also believes it will be a difficult task for the government to twin Highway 3 with all the businesses encroaching on the highway, if it acts later than sooner to twin.
In the meantime, as the study gets under way, Chapman said the association will continue with traffic counts for Highway 3.
“We want to continue with some of the safety collision stats ongoing on Highway 3. We want to build those numbers and I think we can do that more on our own than through a study with Van Horne. Alberta Transportation has a number of those stats already and we just want to compile them and make them presentable in addition to this study,” Chapman said.
Association Administrator Gloria Roth said the association is pleased the Alberta Transportation Minister Brian Mason feels Highway 3 twinning is important enough to update the cost-benefit analysis.
“We’re pretty confident it’s going to show today as it did in 2001, it would be feasible and a benefit to our community to twin Highway 3,” Roth said.
Right now, Roth added, the association realizes funds aren’t available but what the association would like to see are funds to go into the design of the project.
“It takes quite awhile for the pavement to happen. There’s a lot of behind the scenes through the design process. What we’re looking for now is more of a commitment towards the design, so when the funds do become available we’re ready to hit the ground running,” said Roth.
Roth said the association would like to have designs ready for the high priority areas, which the association believes should include the Crowsnest Pass and the Lamb Weston area by Taber to the Bow Island area.
“We’re thrilled to be able to move forward with this,” she added.