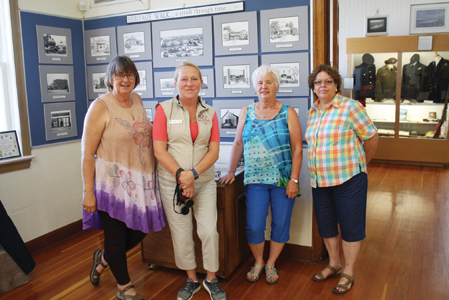 Judges from Communities In Bloom (CIB) visited Coaldale last week to tour the Lethbridge County community and rate its aesthetic appeal, community spirit and its overall goodness.
Judges Sharon Miller and Alice Laine met with the local CIB committee, as members of Coaldale town council and staff presented information about the town, prior to the CIB tour throughout the community.
One of the first stops on the tour was in front of where the Coaldale Food Bank, Wise Eyes Optometry and Little Bow MLA Dave Schneider constituency office call home — the old Town of Coaldale Office Building.
This building is an official stop along the Coaldale Heritage Walk — a stroll through time — self-guided walking tour. The Coaldale Heritage Walk pamphlet states, “Interesting tidbits from the early Coaldale Main Street business community.”
The walk features 18 points of interest including Coaldale Insurance (The McFarland Hardware Building), the Gem of the West Museum and even the Sunny South News office (The Dr. Epp Medical Clinic Building).
“We started in September of 2009 and completed it in spring of 2012. It took us quite a long time. We’re very pleased at the level of support we had from the town. From the citizens of the town, the business community, the service clubs — we’re just so proud everybody was able to get together and support us,” said Clarice Santa, chair of the Heritage Walk Committee.
“I think one of the things I was overwhelmed with was the amount of support we had from a variety of people. We had our committee of eight and then also four other people, not on the committee, but they spent absolutely a great number of hours to help us complete it,” she said, adding she estimates between the committee and all the help it probably took about 1,200 hours to complete the project.
“We selected buildings that were more than 50 years old. We did extensive research and used a great number of research tools, right down to the bottom of everything an all the information there was about the buildings,” she said.
According to Santa, history is summarized on the plaques secured at select buildings and there’s a kiosk at the Gem of the West Museum with photos of all of the buildings and a narrative loaded on computers to tell the tales.
Not only were the citizens of Coaldale generous with their time, Santa explained, they were generous with their money too.
“We had 14 donors ranging from a donation of $200 to $5,000. We consider that to be very good support. We had a number of people who donated in-kind. We had eight donors — donations ranging from $750 to $3,800 and this is work they did, supplies they gave us, etc. For a total of $16,000. We had, what I considered to be, absolutely amazing support,” she said.
And, because the community put in so much to fund the project, the committee didn’t even need to apply for grants.