Generosity a key to success 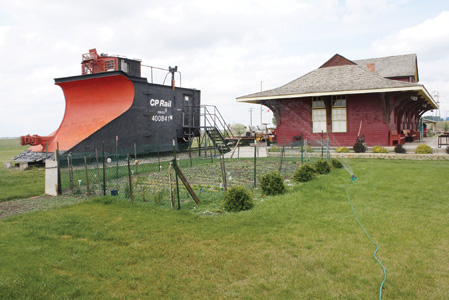 Summer sizzles at Coyote Flats Pioneer Village at the Prairie Tractor and Engine Museum just outside of Picture Butte, as the local tourist attraction keeps on keeping on with a wide-variety of events and activities for the entire family.
Pieter van Ewik, general manager, shared a story about the museum’s barbecue and how it has become a way to network with neighbours and is a way the museum can get the word out about the tiny historical village.
According to van Ewik, the museum was asked by local businesses/organizations in the past if they could borrow their large barbecue for events and the business/organization would, in return, donate funds to the not-for-profit attraction.
Another time, they were asked if the museum could loan a few volunteers to help cook a meal, along with the use of the large barbecue. “I said, what time would you like us there?” he joked, adding the museum put up a banner and the business/organization mentioned a donation jar could also be put up and raised nearly $50 in donations, on top of the donation for the use of the barbecue. “They had a very nice customer appreciation day and a number of people came out,” he said. “I got a chance to talk about the museum.”
“So, that’s good,” he added.
Just prior to the start of the summer tourist season, 800 students from Lethbridge County and the surrounding area visited the museum for its school program. The program ran from the middle of May until the end of June. The schools were also very generous with donations.
According to van Ewik, the museum also received a donation from a local wind farm from Carmangay. “They gave us $1,600. We used a part of that to buy wooden rulers, which we handed out to all the school kids. It’s nice for advertising,” he said, adding the museum’s name is on the rulers and the website is listed.
Earlier in the summer, van Ewik added, the museum saw a lot of Dutch visitors. “I still speak Dutch. It’s really kind of fun to take them around and do at least a part of it in Dutch,” he said, adding the visitors really appreciated the extra touch and were very generous too.
To them, he explained, the historic village looks like the Wild Wild West.
“When you walk into the town it does look like a western village. To us, it’s a pioneer village from the early 1900s,” he said, adding the Dutch tourists just loved it. In Holland, he noted, all the history is much older and history from the early 1900s is new and fascinating to many tourists.
Earlier this summer, van Ewik said, the Sunny South Sams paid a visit for a camp out of 20 units.
“That was really well attended. They rent the hall and have a wonderful time looking around.”
The museum hosted a car show and shine and will continue to host weddings, family reunions and serve up some sweet treats at the ice cream shop.
Coyote Flats Pioneer Village also is gearing up for Harvest Days Aug. 19-21. “It really is starting to shape up to be a solid year,” van Ewik said.