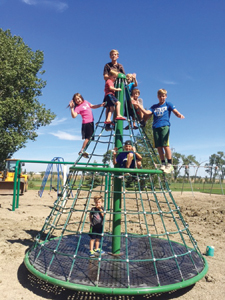 Sunnyside School, located just outside of Lethbridge, has completed a brand new playground build, four years in the making.
“We have completed our playground that we had been fundraising for, for the past four years. We built it at the end of August,” said Alix Hirsche, president of the Sunnyside Community Association at the school.
Tomorrow, there will be an official grand opening of the new playground and a big thank you to the fundraising supporters and for all the volunteers that have helped out over the years.
Hirsche noted the project received a few grants to help the playground build dream become a reality this past summer including a $100,000 grant from the Alberta government and a grant from Farm Credit Canada.
Because of certain standards school boards require for playgrounds and since the previous playground at Sunnyside School was made of wood, Hirsche explained, something needed to be done to upgrade and meet the new standards set out for playgrounds.
“We started to fundraise and we would hold an annual barn dance we’ve had every year for the past five years. It would bring in $30,000 every year and we would have 350 people. We slowly just built up our trying to fundraise for at least half of what the playground would cost,” she said, adding grants helped cover the rest of the funds needed to pay for the over $200,000 price tag for a new playground.
According to Hirsche, the initiative gained amazing support from the community.
“We’re just a small little community — no town or anything. To have that ability to do that, it’s a beautiful, huge and awesome playground.”
Over the four years, Hirsche said, the fundraising initiative brought in around $90,000. Not bad for a school with just over 100 students from Preschool to Grade 6.
“My father went there, I went there and now my four kids have gone there, and I still have two, my last two are still there,” Hirsche said.
“There’s a lot of families there that have three generations of families,” she said, adding that’s why there’s such great support.
“They want to see the school looking great and continuing on with tradition.”
The grand opening of the new playground kicks off at 5:30 p.m. and the event is being touted as a Harvest Barbecue and Playground Grand Opening.
“It’s open to all who have supported us over the years,” Hirsche said.