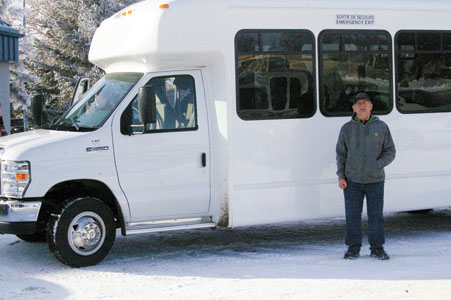 Picture Butte and District’s Transportation Society needs you! The society is in need of members to sit on the board and to volunteer to keep the local and vital aspect of the community operating.
“It’s not the finance — we need people involved, we need to let people know what service we provide. We have volunteer drivers and Picture Butte and area, we’ve served them for many years. Even as far as Lomond. We’d like to see that service continue,” said President Roelof Scholten.
Right now, the society doesn’t have the membership to keep the society going and the society is in dire need of new recruits.
“Therefore, we need people from Picture Butte and area to step up and be a member of the board, so we can move on,” he added.
Scholten noted one of the regulations to keep the organization as a charitable status is to have a healthy membership, which continues to grow.
According to Scholten, the society provides transportation for seniors and others in and around the community to doctor and dentist appointments, provides transportation for shopping groups, rides to live theatre events in various locations and travel trips.
“They can rent this bus and we take tours throughout southern Alberta,” he said. Tours have included trips to Cardston, Medicine Hat, Spruce Meadows and to Rosebud.
Volunteer drivers are not the problem, Scholten added.
“Right now, we need the membership, that’s what we’re after in order to keep the society operating. We’ve got to have the membership and we’ve got to follow our guidelines in order to protect our status,” Scholten explained. The next meeting for the society is in December but in the meantime, it would be good for new members to come on board.
Society member and a part of the executive Vern King said transportation services by the society is available to all residents in the community.
“Not just seniors,” he said. “Even student groups, as long as there’s proper supervision,” King said.
According to King, the society has been in operation since 2005.
“Some of the founding members are still on the board,” King noted.
Historically, the hospital originally purchased the bus and then the society took over the management of the bus, at the time.
“The town purchased the bus and then it was only maybe two or three years ago we took ownership of the bus. Up to that point, we were only managing the operation of the bus,” King said. Since then, the society has purchased a new bus for transportation services.
Scholten said the bus is available by appointment only through the Piyami Lodge in Picture Butte.
“That’s where the schedule is for payment and what it costs to rent the bus,” he said, adding there’s also a brochure with the information available at various locations.
According to the society, the goal was to originally provide seniors in Picture Butte and surrounding area with transportation to hospital appointments and outings to different points of interest in southern Alberta.