Nobleford to the rescue 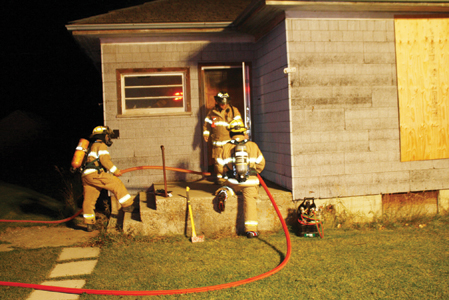 Nobleford and District Emergency Services has had a few new recruits join the Lethbridge County-based department, according to Fire Chief Ryan Wagner. “As of late, I have three people on probation. We’re sitting around 22 members — all with a bunch of different experience in life that brings stuff to the table,” he noted, adding the department is always looking for new volunteers. “I like to be around the 24, but the nature of the industry is not everyone can commit as much as they want, so I know some people are interested — I’m going to wait until they come knocking on the door.”
Wagner said the department has been quite fortunate this year with donations. One of the local 4-H clubs in the area donated sales from one of the organization’s profit calves, Wagner added. “To fund an emergency livestock response trailer. That’s something new. We’re getting that going. It’s just about fully completed and we still have to do the training, which is a course put on by Lakeland College Emergency Livestock Response,” Wagner said.
It’s been a good year for the department, Wagner said, and the department received some new equipment including their SVBAs being replaced.
“Our Jaws of Life have been replaced. We’re sitting pretty good equipment-wise,” he said.
Call volume-wise, Wagner said, the department is up this year.
“We’re probably going to have a record year for call volume. We’ve already surpassed what we had last year by quite a bit. It’s been pretty busy,” he noted.
The majority of calls with most fire departments in the area, Wagner said, is medical — 60-70 per cent medical calls. “It takes up a lot of our response time.”
According to Wagner, the department has been fortunate there hasn’t been any large-scale grass fires.
“We’ve had a couple of little ones but nothing significant. It’s been a really wet year, which is a little scary because there’s a lot of growth. In the winter time, come December, is usually when grass fire season kind of starts. The Chinooks melt all the snow and the fuel in the ditches and fields is still there and that’s when we see the grass fire season start,” Wagner said.
Wagner also noted the round-a-bout recently installed at the intersection of Highway 519 and Highway 23 near Nobleford works — if motorists know how to work a round-a-bout. “We’ve been called there about a dozen times. Most of them with minor injuries, which is nice to see because we’re so used to going to the really serious ones at that intersection. I would take 100 calls there a year versus what we were getting before because there’s less injury, there’s still vehicle damage. We had the two cattle liner rollovers with some animals that passed away on that. It’s kind of bittersweet. We still are responding there but we’re not getting the seriousness,” he said.
Wagner and another member from the Nobleford department and two members from the Coalhurst department travelled down to Colorado for training provided by CP Rail. “It’s called Crude By Rail. It was a full week of hands-on and classroom training dealing with large-scale disasters with train derailments from crude oil fires to liquid propane fires. It was quite intense but a lot of fun though,” Wagner explained.
An Emergency Response Plan (ERP) is in the works for the area, Wagner said, and there are train lines going through the Village of Nobleford and surrounding area.
“Hopefully we don’t have to use it. If something goes wrong like that, it’s going to be scary and there’s a lot that can go wrong,” he added.
Last week, the department travelled to a Lethbridge County-based location to take part in night training. “We’re lucky enough to have a house donated to us by a county member, so we can do a bunch of live training. We’re going to do some search and rescue techniques, victim recovery and some live fire suppression inside the house,” he said, last week during the live training exercise.
A bunch of members during Fire Prevention Week will also be visiting a few schools in the area to teach fire safety to elementary students.
Wagner said don’t forget to attend the 3rd Annual Wing Fling Oct. 21, which is put on by the Firefighters Society and is a fundraiser for the department. “There’s a live auction, there’s wings and there’s beer. It’s going to be a good night,” Wagner said. “We’ve had a good turnout over the years.”